The Berlinale is one of the most important film festivals in the world. It is not only of great importance for Berlin as a cultural location, but also the first important industry meeting of the year. What is successful here could screen all over the world later in the year. This year, for the first time, there is a two-part hybrid version. In March, the Berlinale Talents competition as an online-only event; then in the summer, the public screenings in Berlin cinemas. 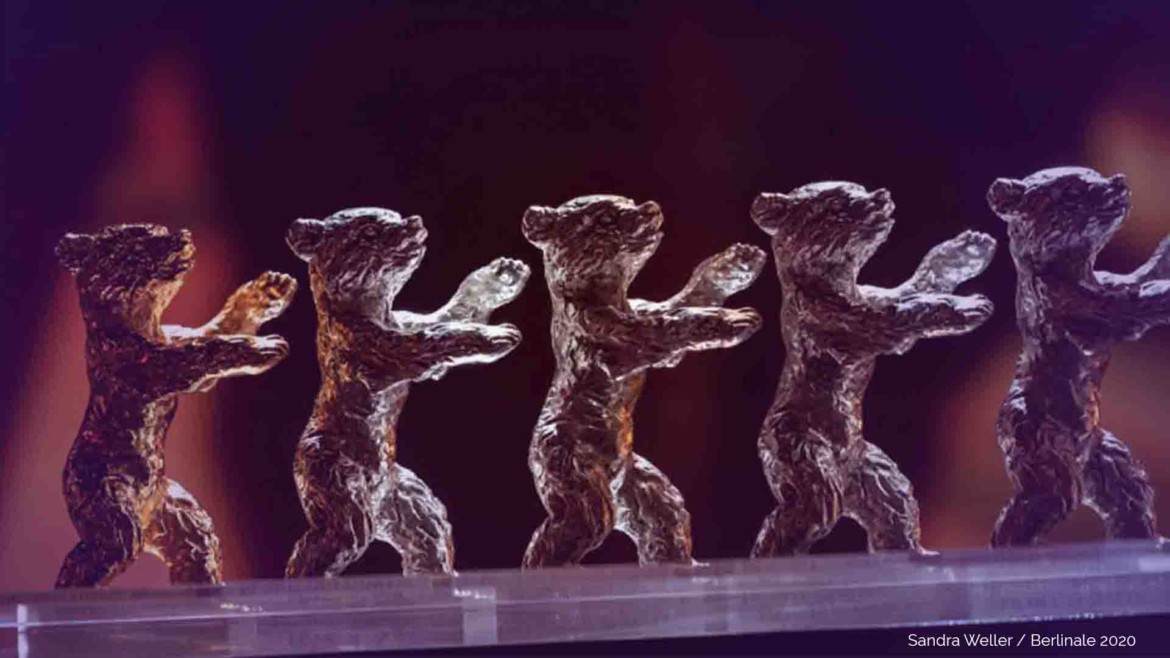 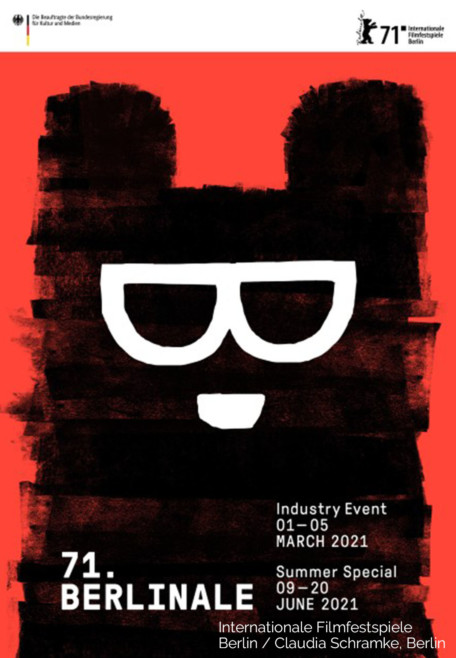 Today, the images from last year’s Berlinale 2020 look like a glimpse into a distant past. It seems almost unreal when the stars and starlets walk down the red carpet at Potsdamer Platz surrounded by press and fans and present themselves to the cameras. When looking at the same venues in 2021, wistfulness sets in. Instead of glitz and glamour, yawning doctrine and gray skies. The Berlinale seems to be on hiatus, hopefully waiting for a summer when everyone will be allowed to cavort in front of the screens again, inoculated. Whether that will actually be possible remains unclear.

But the already beleaguered film industry needs festivals like the Berlinale because, among other things, this is where it is decided what will be shown in cinemas around the world this summer. It’s also the first important industry gathering of the year, where collaborations are formed and deals are struck. For Berlinale director Mariette Rissenbeek, it is clear just a few days before the festival begins that this event must at least take place digitally.

For a long time, the management, which is only in its second business year, had a hard time getting a digital version of the festival off the ground. Only when the Minister of State for Culture, Monika Grütters, exerted pressure and made it clear in no uncertain terms that the Berlinale should not be sacrificed to Corona did the Berlinale organizers give in. Grütters also held out the prospect of additional financial support from the Neustart Kultur pot. The result is the aforementioned bifurcation.

The event for the ‘Industry’ including the virtual awarding of the Bears and the European Film Market has now taken place in the first week of March. One thing became clear pretty quickly: the exclusivity and access restrictions remained online. Only invited and accredited persons were allowed to watch the films in the otherwise blocked online portal. And even for them, it didn’t really get any easier online, as each film was only available on demand for one day. Watching all the films in the competition was hardly possible.

In addition to a small open access offer on the Berlinale Talents website, where the films of the competition were presented and interviews or sound performances were shown, the virtual awarding of the bears on the last day was also streamed live on YouTube and Facebook.

Jury prizes were awarded to “Wheel of Fortune and Fantasy” by Ryusuke Hamaguchi (Grand Jury Prize) and “Herr Bachmann und seine Klasse” by Maria Speth (Jury Prize). Best Director went to Dénes Nagy for “Natural Light.” New this year was the gender-neutral announcement in the competition, i.e. that there were no separate prizes for male and female performers, which was decided in the spirit of gender diversity and is thus contemporary. This prize was awarded to Maren Eggert for the leading role for her performance in “Ich bin dein Mensch” by Maria Schrader and to Lilla Kizinger for the supporting role in “Forest – I see you Everywhere” by Bence Fliegauf. Hong Sangsoo received the Silver Bear for Best Screenplay for “Introduction,” where he also directed. The Bear for Outstanding Artistic Achievement went to Yibrán Asuad for his montage “A Cop Movie.”

In addition to Berlinale Talents, the European Film Market (EFM) also ran completely online this year. Here, too, online access was necessary, for which one had to be accredited. The EFM is considered one of the most important trade platforms for audiovisual content and is the first important industry meeting of the year. The number of exhibitors was increased within the online possibilities, so that this year 504 exhibitors* could participate at 264 virtual booths. In their report, the organizers expressed their satisfaction with the progress and acceptance of the online format. Many projects were realized or initiated during the five days. With 12,000 visitors daily, the traffic was very satisfactory. 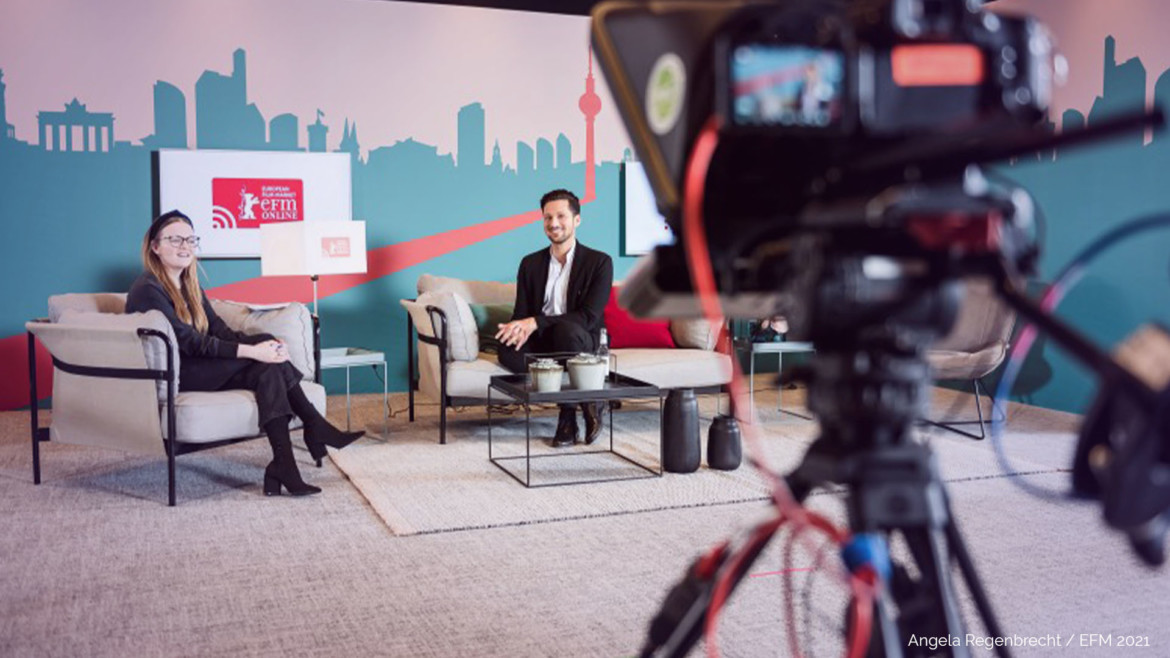 Also part of the EFM were the ‘Industry Sessions’, which offered a wide range of talks, roundtables, workshops, think tanks and showcases. Almost all of them could be used freely by the accredited participants. The only exception was the Think Tanks, which were held on three topics: ‘Digitising The Business’, ‘The Role and Responsibilities of Festivals and Markets’ and ‘Diversifying the Business’. According to official statements, the closed doors of this self-reflective format were intended to ensure a safe space in which participants could openly address sensitive and problematic experiences without fear.

But despite all understanding for the great relevance of safe spaces in times of right-wing populism and aggressive trolling, the opportunity was missed here to conduct self-critical discourse openly on an international stage. The Berlinale thus retains its discursive power as a traditional institution and decides who is allowed to participate and who is not; it does not let itself be seen in the cards. In the end, what remains is a meager, six-page results paper. And so what is sold as wokeness only fits into the logic of exclusivity, limited access and intransparency.

The Berlinale has presented itself in crisis mode. It was too hesitant for too long and didn’t really want to move away from its tradition, so digital had to feel like a stopgap measure that was only taken in response to political pressure. In an interview with BR, screenwriter Felix von Böhm said: “Festivals exist because we love cinema. And now there are no cinemas. That makes it insanely difficult to even save the festivals over these difficult times.” That sums up the Berlinale’s mode. Waiting until it can go on as before, completely committed to tradition with red carpet and cinema screen; and severely limited access.

Organizer: Kulturkosmos Müritz e.V. Far away from everyday life, a parallel society of a very…