Every crisis also means opportunities. For the Content Creator Festival 2021, we invited two guests who were lucky enough to benefit from the Corona crisis. First, Elisabeth Caesar, who launched the platform Spectyou in 2020, a kind of Netflix for performing arts with networking opportunities for the industry. And on the other, voice actor, show and puppeteer Benno Lehman, who was able to build his comedy channel Bennos Project during the lockdown. In the talk, our host Timm Lindenau spoke with the two about their projects, the crisis and the future of artificial intelligence in the cultural and creative industries. 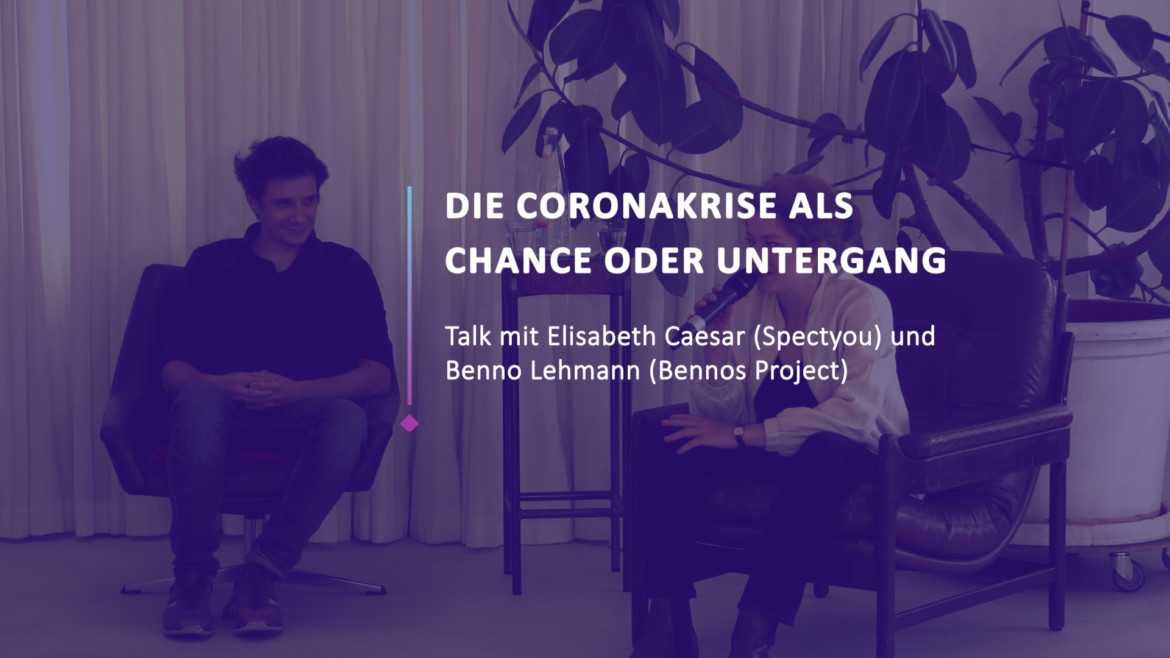 It can hardly be emphasized often enough how hard the cultural and creative industries were hit by the Corona crisis and the measures taken to combat it. And yet there are also a few creative professionals who were lucky or privileged to be able to use the crisis for themselves and their projects, who were able to launch new things or expand existing ones. At the Content Creator Festival 2021, we wanted to hear exactly such stories, because the crisis, apart from all the suffering it creates, can also be an opportunity in the end and initiate change. To this end, we invited Elisabeth Ceasar, the founder of Spectyou, and the face behind “Benno’s Project,” the dubbing artist and show and puppeteer Benno Lehmann.

Elisabeth Caesar worked for a long time as a drama dramaturge, most recently in Bern. She always found it a pity that theater has to take place in a time- and space-bound manner, i.e. always tied to the venue and the season. Thus, many great productions, especially when they are realized at smaller and lesser-known houses, would reach very few people. The idea for Spectyou, a mixture of Netflix and LinkedIn for dance and performing arts, came to her long before the Corona crisis, and she already began initial planning in 2018. But the launch was then accelerated enormously by the crisis, as the industry urgently needed new perspectives and business models.

Benno Lehmann is a voice actor, show and puppeteer. This career began for him in 1993 in the children’s ensemble of the Friedrichstadtpalast. He later added to his practical experience by studying at the “Ernst Busch” Academy of Dramatic Art. In the course of time, Benno has not only seen many stages, but also acted on them, such as at the Berliner Ensemble, the Maxim Gorki Theater or the Volksbühne. He also works as a dubbing director and dubbing actor. During the crisis, Benno began to dub virologist Christian Drosten for his YouTube channel “Bennos Project” and had great success.

Democratization of the theater industry

Elisabeth and Benno were both very lucky that they already had projects in the pipeline that could benefit from the crisis. “Theater online would have been unthinkable two years ago,” Elisabeth says in the talk. And Benno immediately agrees that online offerings in the field of performing arts often had a bad reputation. The crisis changed that and required the theater industry to rethink and come up with new business models, which Elisabeth had ready to a certain extent. But she stresses that Spectyou should not be an alternative to presence performances. She herself values the physical co-presence of performers and spectators very much and nothing can replace this. Spectyou is meant to be an additional offer that reaches other target groups and also enables small venues in non-urban areas to reach a broader audience. So Elisabeth is also concerned with the democratization of the scene.

Not the crisis itself, of course, but its effects were not so inconvenient for Benno. Benno had planned to take a break from theater anyway in order to devote himself to his YouTube channel “Bennos Project,” among other things, where he provides public figures with funny dubbing voices and characters. He already had a recording studio at home, so he could use the lockdown for himself. The channel got a big viral boost from the dubbing of virologist Christian Drosten. This naturally spurred Benno and his project.

In the course of the changes for the cultural and creative industries, Elisabeth, Benno and Timm also talk about the use of artificial intelligence, whether it can also be creative and what that could mean for creative professionals. In this context, Elisabeth also mentions the Tools Festival, a digital theater lab where experiments with new techniques in theater take place.

The complete talk and many other contents are available on the Comacon YouTube channel.

IT SHOULD BE THE PERFECT SOLUTION FOR ALL GAMERS: GAMESCOM NOW. A streaming event that…