The three adventurers of Projekt:Antarktis are among those who make the creative industry so unique and diverse. In 2018, Tim David Müller-Zietzke, Dennis Vogt and Michael Ginzburg set off to Antarctica to film the documentary of the same name. As part of the 2021 Content Creator Festival, Tim and Dennis will appear in a moderated conversation. This will include a behind-the-scenes look at filming abroad and the filmmakers will talk about the experiences they gained and the learning process that resulted. Here, every dreamer can learn something and be motivated by the story of the three friends. 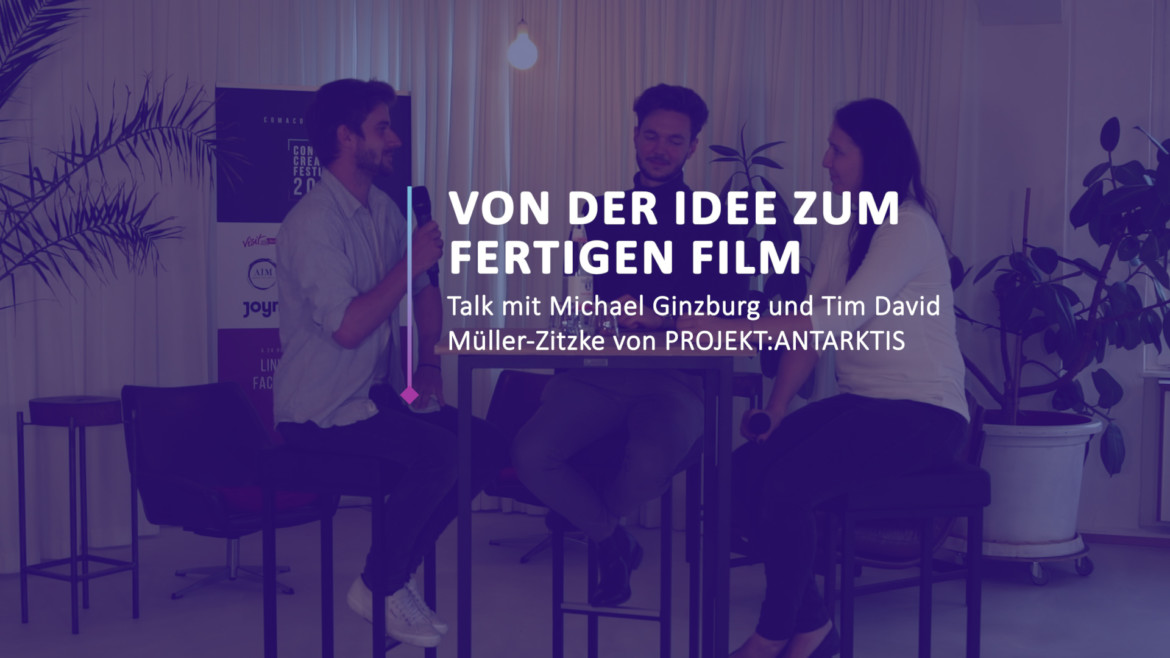 The success story of Tim, Dennis and Michael from Project: Antarctica makes the hearts of all inspiration seekers beat faster. The three friends actually realized their dream, a film project in Antarctica, and inspire with the resulting documentary. At the first Content Creator Festival 2021, Tim and Dennis took part as panelists and answered questions about their project. They reported on the difficulties, surprises and successes surrounding the creation process of their film.

Tim David Müller-Zietzke has already achieved what many dream of. His career reflects his strong explorer spirit and his ability to defy expectations. While still in the midst of his studies in digital media, he has recorded numerous professional successes. As a film producer and photographer, he has appeared in a Hollywood blockbuster, his own documentary, and virtual reality films. Additionally, his expertise has been sought after at elite universities, which has already allowed Tim to lecture at Oxford and Cambridge Universities.

Dennis Vogt is passionate about filmmaking and puts himself in the most exciting situations to capture the perfect footage. He is also a digital media student, but in recent years has spent more time traveling than over books. As a cinematographer and editor, he has accompanied projects in countries all over the world and loves adventure. He realized documentaries and commercials in the past before joining the project: Antarctica.

“It doesn’t always have to be the sensible way. Do what you burn for.”

In conversation with our presenter Denise Kulik, it quickly becomes clear what the motivation behind the project: Antarctica is. Again and again, the filmmakers emphasize their goal of being a role model for those who dream of new paths and extraordinary projects. They tell how a rough idea grew into a huge project, and what difficulties they encountered during its implementation. Above all, they were not aware of the expense of such a film project at the beginning. They quickly reached their limits, both organizationally and financially, and had to look for support. To this end, the three friends drew up a rough concept and used it to acquire sponsors through whom they could finance the entire project. During the shoot, the team paid special attention to actively involving the sponsors in the production. Here’s a little tip from the two filmmakers: the more detailed the concept, the more interest the sponsors will show.

A learning process of ups and downs

After four weeks, the shoot was completed and the three adventurers were back in Germany. But they didn’t have time to take a deep breath. The film had to be cut and edited within eight months so that the premiere could take place at the scheduled time. The marketing of the film was also in full swing. The filmmakers were already able to score points with the community during the shoot. On social media, followers were taken along on the journey and were able to take a regular look behind the scenes. This already generated a large reach and, with the additional collaboration with a press agency, the marketing was also handled.

The friends proudly look back on the process of making their film. They tell us how they got to know the joys and sorrows of the film world in a very short time and were surprised again and again by new twists and turns. Above all, dealing with unforeseen difficulties turned out to be very important. Here Tim and Dennis emphasize that the film might never have been made if they had buried their heads in the sand when faced with obstacles. Ergo: just do it, expect hurdles and face them with confidence. For the friends, all of this is part of a learning process on which the next projects can build.

“If you don’t do anything, you can’t make mistakes.”

For the time being, there doesn’t seem to be a big project for Team:Antarctica in the near future. At least none that they want to tell us about. Three years after the shooting, the filmmakers are still busy with the marketing of the documentary: the sale of film scenes as NFTs, the leak of the DVD and the publication of a book were the latest developments of Project:Antarctica. Nevertheless, the filmmakers emphasize their penchant for creativity and do not rule out a new project. Currently, however, they are concentrating on smaller projects for the time being, such as at the Polarstern shipyard in Bremerhaven. In the future, the focus will continue to be in the digital area.

Corona concerts of the stars – Invigorate everyday life and put you in a good mood!

We sit at home, see the same four walls every day, the shocking news about…

Algorithms vs. Artistic Freedom – Is a Fundamental Right in Danger?

In recent years, there has been a lot of talk about algorithms and their tendency…