On behalf of the German Federal Ministry of Economics and Energy (BMWi), Goldmedia GmbH, Hamburg Media School (HMS) and Prof. rer. oec. Rüdiger Wink (HTWK Leipzig) examined the economic key figures of the cultural and creative industries (KuK) for the “Monitoring Report on the Cultural and Creative Industries 2020”. The annual monitoring reports on the status and perspectives of the cultural and creative industries in Germany are collected. In addition, in September 2020, selected associations in the respective sub-markets were asked for their assessments of trends and challenges. 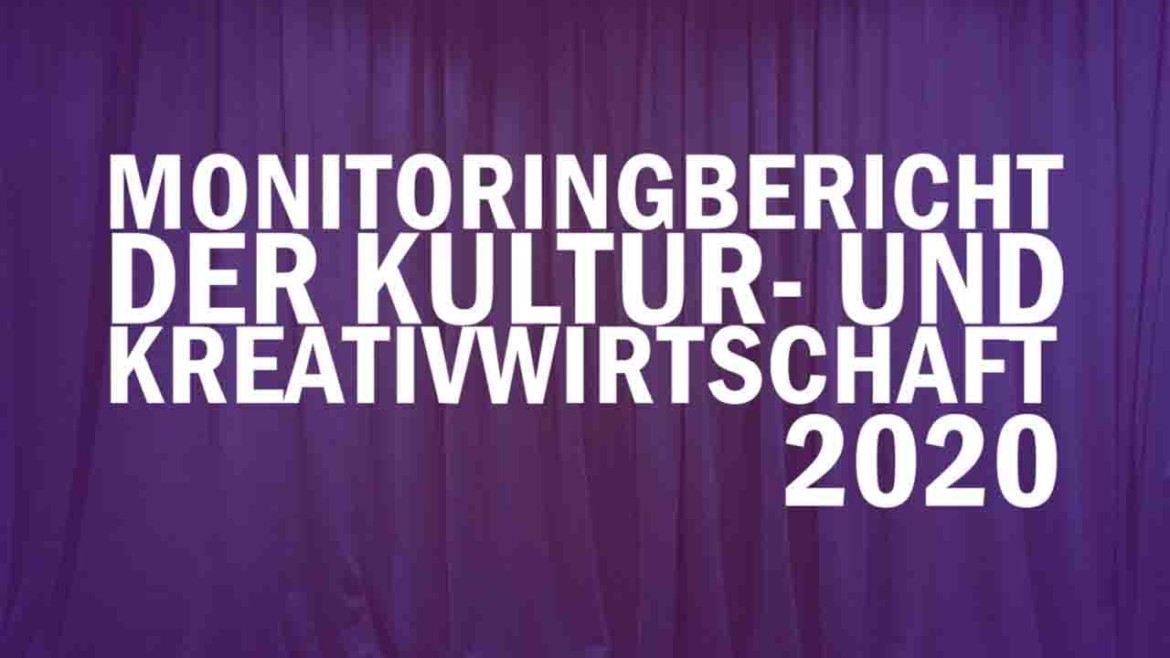 THE IMPORTANTS OF THE INDUSTRY

More than 258,790 companies and over 1.2 million people employed in the cultural and creative industries. With a rate of 20.9 percent, the number of self-employed is exceptionally high. 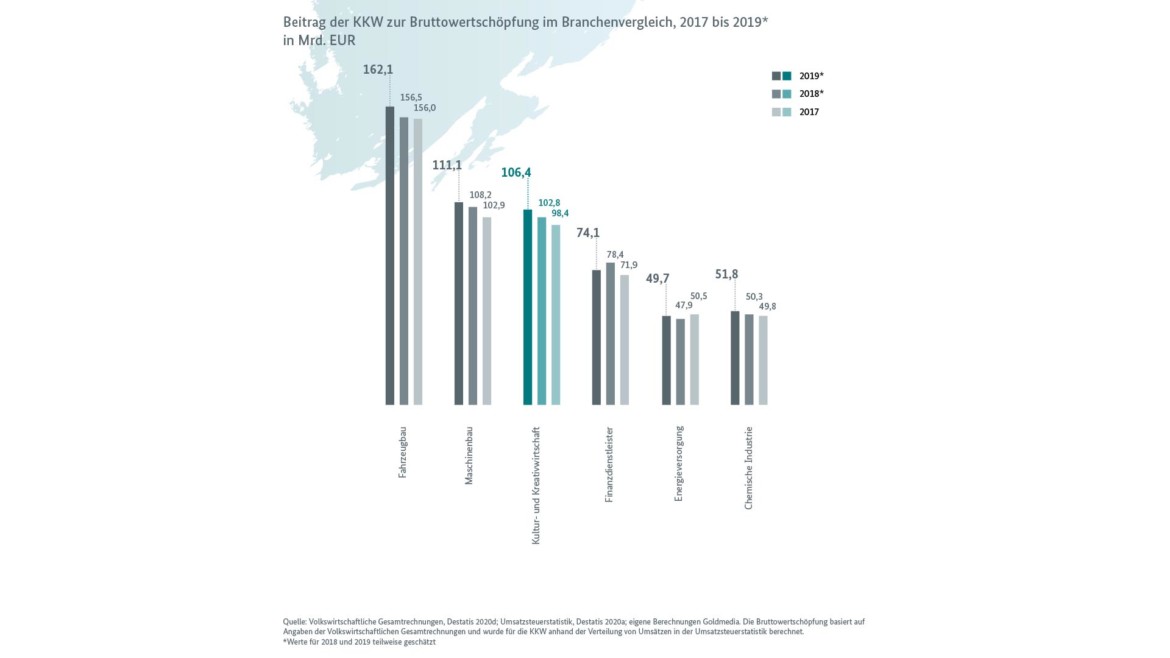 With more than 50 billion Euros in revenues in 2019, the software/games industry is the largest sub-market in the German cultural and creative industries, accounting for around a quarter of total revenues and also the highest gross value added. The second and third largest submarkets are the press and advertising market, each with sales of around 30 billion Euros.

In the design industry, with over 60,000, most companies, including sole proprietorships, are to be found, followed by the architecture market and the software/games industry.

Overview of the submarkets in 2019 and the effects of the corona pandemic in 2020:

In 2019, the German music industry was able to generate sales of around EUR 9.0 billion, which corresponds to a 4.6 percent share of the total cultural and creative industries. Theater/concert-organizers were able to achieve the highest turnover of EUR 2.3 billion. A total of 90,879 people were employed in the music industry, of which 36,110 were marginally employed and 54,769 were in the core workforce.

Due to the extensive ban on major events until the end of the year, the music industry can expect a serious loss of up to -59 percent in turnover in 2020.

During the Corona crisis in the first half of 2020, audio streaming continued to grow by 21 percent (source: German Music Industry Association 2020). However, due to the corona pandemic, the live sector is severely threatened and it is still not clear when major events will even be possible in the following year. 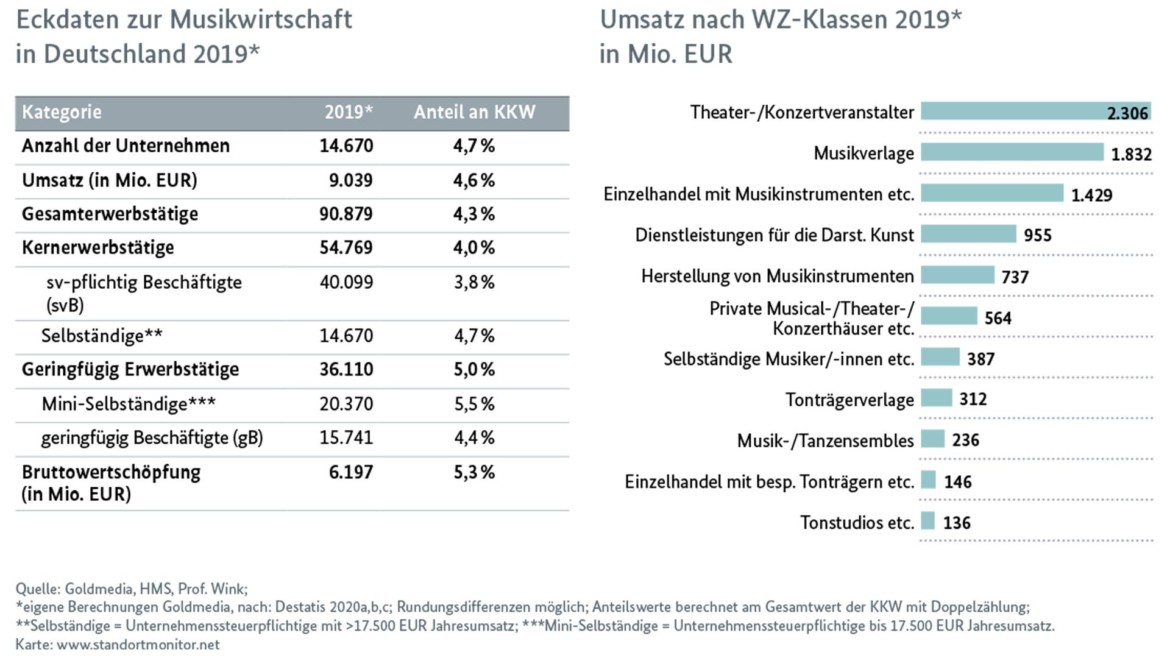 In 2019, the German book market generated total sales of around EUR 14.3 billion. This corresponds to about 7.2 percent of the sales in the entire cultural and creative industries. With EUR 8.6 billion (60 percent), the book publishers had the largest share of sales, and the book trade generated about a quarter of total sales with EUR 3.8 billion. 113,507 people were employed in the book market in 2019, of which 44,683 were marginally employed and 68,824 were employed in the core workforce.

In 2019, sales in the German art market amounted to approximately EUR 2.2 billion. At EUR 860 million, independent visual artists accounted for the largest share of sales. The retail trade in art objects generated sales of EUR 643 million, followed by museum stores, which generated around 19 percent with sales of EUR 419 million. In 2019, a total of 49,224 people were employed in the art market, of which 17,679 were core employees and 31,545 were marginally employed, predominantly mini self-employed.

However, the art market also faces challenges this year due to the Corona Pandemic. COVID-19 is causing a drop in sales of up to 31 percent due to gallery closures, reduced opening hours, cancellations of art fairs and the absence of international visitors and buyers. Due to the current lockdown, a serious scenario of -64 percent can be expected. In order to counteract this, art is increasingly presented and marketed online and its presence in social media is being strengthened.

The film industry is also extremely affected by the pandemic. For example, it is predicted that sales will shrink by a third compared to the previous year, resulting in a sales loss of over 70 percent. The current 2nd lockdown will hit the film industry hard.

“The Corona crisis hits the film industry from two sides: Cinema closures have eroded the industry’s most important exploitation stage. On top of this come the store closures – as a result of which the home entertainment market with Blu-rays and DVDs, which is important in Germany, has collapsed. On the production side, legal uncertainties and filming bans have brought film sets to a standstill. Nevertheless, high fixed costs continue to be incurred from the cinemas to the studios”. Thomas Negele, President of SPIO e.V. Source: Blickpunkt: Film, Apr. 2020

The largest private broadcasting groups ProSiebenSat.1 Media SE and Mediengruppe RTL Deutschland reported revenue losses of 12 percent and 17 percent respectively for the first half of 2020 (source: ProSiebenSat.1 Media SE 2020; RTL Group 2020). A revenue decline of between 10 and 17 percent is expected for the entire broadcasting industry. However, a long-term trend has further accelerated during the Corona crisis: While TV and radio advertising expenditure collapsed, online advertising grew by 3 percent (source: Nielsen 2020).

Approximately EUR 5.7 billion turnover was achieved in the market for performers. At EUR 2.2 billion, the theater and concert organizers acquired the largest share of sales, followed by independent stage, film and TV artists (EUR 1.3 billion, 23 percent). A total of 111,300 people are employed in the market, of which 48,578 are core employees and 62,722 are marginally employed.

But the Corona pandemic has not stopped at the performing arts either. Cancellations of events have hit self-employed artists and companies very hard, resulting in a significant drop in sales. Due to the distance regulations on stage and in the audience and the resulting reduced audience capacity, sales have fallen by up to 75 percent.

Since many communication projects are reduced or cancelled completely, the Corona pandemic is affecting self-employed designers in particular. Sales losses of up to -38 percent are to be expected. 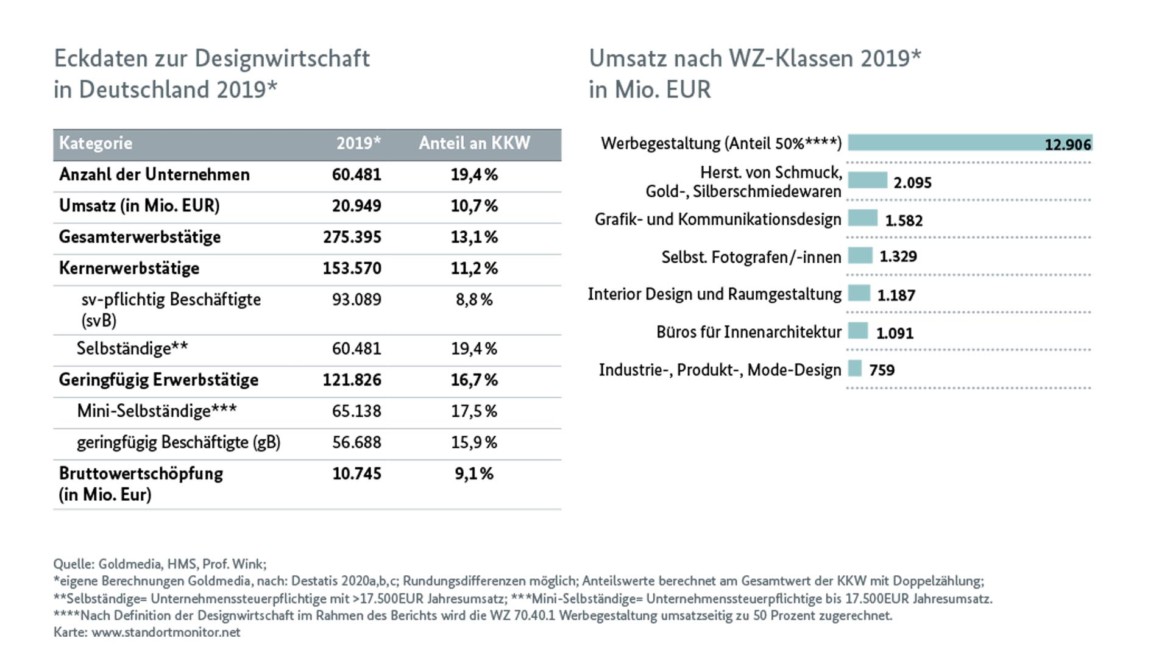 In 2019, the German architecture market generated total revenues of around EUR 12.4 billion, or about 6.3 percent of the total cultural and creative industries. Last year, 176,382 people were employed in the architecture market, 136,910 of them in the core workforce and 39,472 in marginal employment.

The architecture market is one of the few markets in the KuK which, despite the Corona crisis, was highly utilized and therefore less affected. The pandemic has led to increased demand for new concepts for offices and public spaces. In addition, the global climate crisis is presenting the industry with new challenges such as climate-friendly urban planning and architecture, which is boosting sales forecasts.

In 2019, the German press market had a turnover of around EUR 30 billion, which represents around 15.3 percent of the total art and culture industry. Around 35 percent of this is generated by newspaper publishers and 29 percent by magazines. A total of 245,168 people were employed in the press market in 2019, of which 141,568 were employed in the core workforce and 103,600 in marginal employment.

The demand for current news due to the Corona pandemic meant that daily and weekly newspapers benefited greatly from this. However, the lockdown led to significantly lower sales of general-interest magazines. The forecast loss of sales in the press market is between 9 and 14 percent.
Even before the Corona crisis, the press market was already under pressure from declining circulation figures and the digital revolution, and was experiencing falling sales figures.

In 2019, sales in the German advertising market totaled around EUR 29.6 billion, which corresponds to a percentage share of around 15.1 percent of the total cultural and creative industries. The advertising market is made up of just two sectors of the economy, with advertising agencies accounting for around 85 percent, at EUR 25.1 billion.

The clear winner among the sub-markets in the German cultural and creative industries in 2019 was by far the software/games industry. With a turnover of EUR 50.2 billion, this industry accounts for around a quarter of the total turnover. In 2019, 545,714 people were employed in this sector, of which 471,983 were in the core workforce and 73,731 in marginal employment.

The Corona Pandemic is hitting the software and games industry extremely lightly compared to the other sub-markets. Some companies are even recording increased demand as a result of the pandemic-related digitalization surge. Nevertheless, a loss in revenue of 6 percent to 10 percent for the entire submarket is expected for 2020.

Nevertheless, the games market in Germany will become increasingly important: For example, the development of games is to receive federal funding of around EUR 250 million in the next few years (source: BMVI 2020). Among other things, investments in network infrastructure, access to capital and the availability of qualified employees are crucial for further market growth. 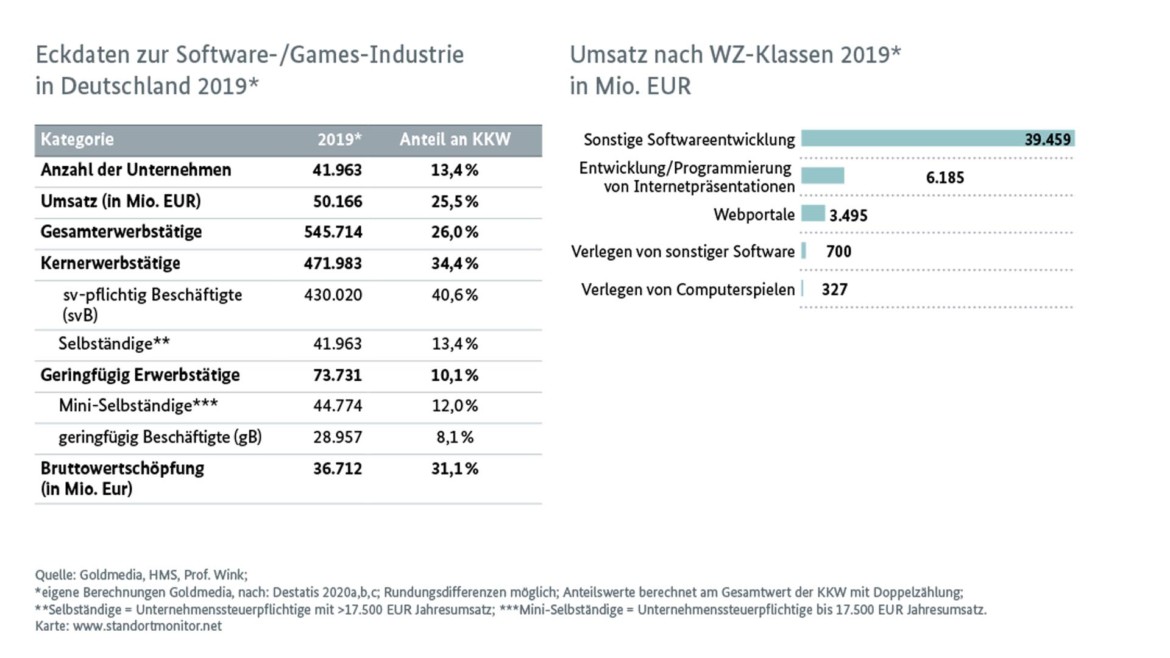 Despite declining sales, the cultural and creative industries are an industry with a future! Since the end of the 1980s, it has developed into one of the most dynamic branches of the global economy. In 2019, the gross value added in Germany amounted to 106.4 billion euros, which represents a considerable share of the total economic performance.

The cultural and creative industries are affected to varying degrees by the Covid 19 pandemic: Although the performing arts, film, art and music sub-markets have experienced and continue to experience particularly severe slumps, the other sub-markets architecture, press and software/games will show a much more resilient performance.

Transmediale 2021/2022 – For once, just do nothing… Refusal as a cultural technique

While the january-grey Berlin still seems to be recovering from the stress of New Year’s Eve, a critical discourse…