documentary Interview We and Art

For his documentary film “Wir und die Kunst” (We and Art), filmmaker Milan Skrobanek accompanied four artists at work. In the film, Funny van Dannen, Sarah Bonetti, Mad C and Jan Georg Schütte reflect on their own creative work and the importance of art and culture for society. Then, in the middle of filming, Corona paralyzed the cultural scene, so that the virus made itself the protagonist without being asked. The film, which was released in April, thus becomes an exciting testimony to a bizarre time without culture. We talked to Milan Skrobanek about the film, the Corona blues and the demons of creative people. 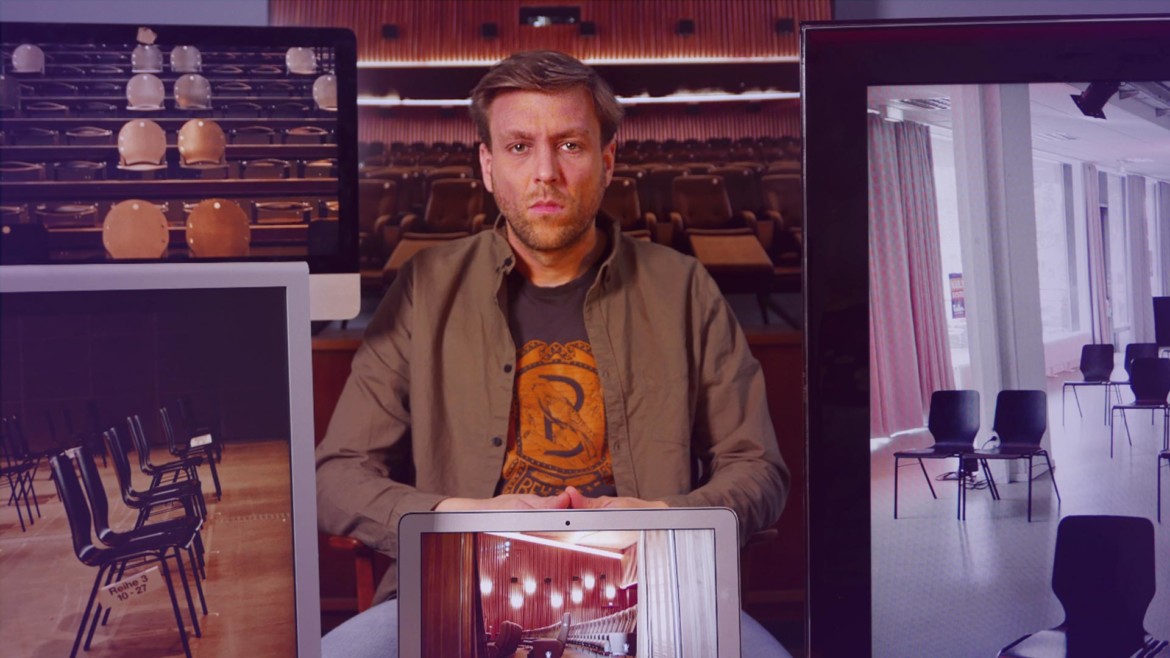 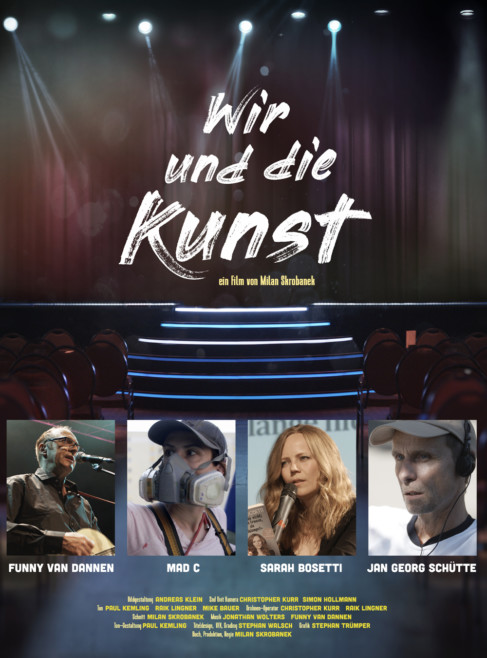 When the coronavirus and the measures to combat it paralyzed the cultural sector in March of last year, a broad discussion began about the role of art and culture in our society. The consistent closure of cultural venues made it clear that, politically speaking, it was not relevant to the system.

Culture and its role in society, as well as the importance of creative professionals, became one of the central issues during the pandemic. The demands for reopening the cultural sector were argued less in economic terms than in social terms. Culture is not simply enjoyment and pastime, it is the infrastructure of our social life.

Milan Skrobanek was in the middle of filming his documentary “We and Art” at the time. Long before Corona, he had already asked himself the question about the significance of art and culture for society, but also for himself as a creative artist. For the film, Milan accompanies four artists in their everyday work and interviews them about their personal relationship to art and culture as well as their own creative work. The four are no strangers: the singer-songwriter, writer and painter Funny van Dannen, the cabaret artist Sarah Bosetti, the filmmaker Jan Georg Schütte and the graffiti artist Mad C can be seen.

In the third act of the film, another main character joins the cast without being asked: Corona.

Artists are not superfluous, but…

The film documents not only the artistic work of the four artists, but also their inner conflicts and doubts about their own work. Again and again, it is about the relevance of their own works and their value for society. “Artists are not superfluous, but entrepreneurs are much more important,” Funny van Dannen sings one of his well-known songs in the film. That’s funny and self-ironic, of course, but it also gets to the heart of an artist’s identity and the crises of meaning that come with it.

Mad C knows this, too. In the film, she tells:

“I have a crisis at least twice a year where I say that what I’m doing doesn’t really have any relevance at all.”

In “We and Art” Milan Skrobanek not only documents. Through the four protagonists, he also expresses his own doubts, crises and worries, which have always accompanied him as a creative artist:

“When you come out of art school, you have this idealistic idea that you’re going to make the world better with your art. And then you realize that was naïve, because you sell yourself more and more. That frustrated me a lot at times. With “We and Art” I wanted to find out through exchange with other artists whether they also have such phases, whether they also question the raison d’être of their art and how they deal with it. That was the ulterior motive; the social meaning of art and culture.”

The immediacy of the documentary 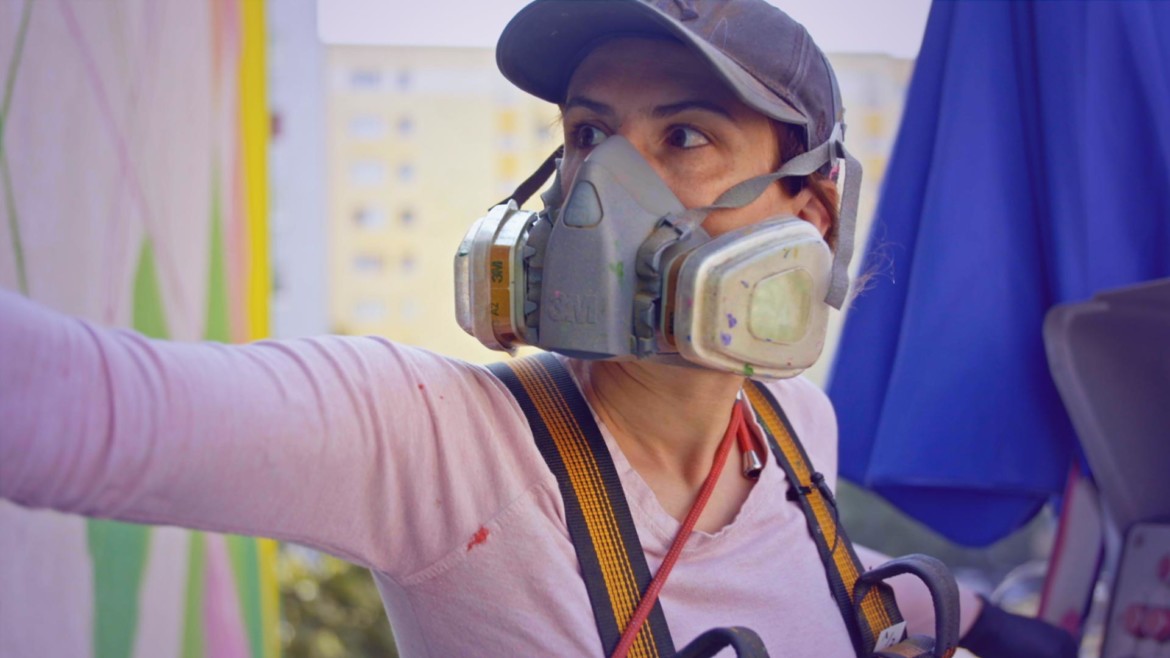 The filmmaker was born and raised in Ahlem in Münsterland. In 2007 he then went to Hamburg to study film at the Hochschule für Bildende Künste after completing his civilian service. There, it was less about performance records and grades and more about the personal and artistic development of the students. So it would not have been a classical film study, but rather an art-philosophical study, Milan tells. The fact that his final project – “The Chinese of Europe” – became a documentary film, for which he accompanied the German table tennis team during the 2012 World Championships in Dortmund, was more of a coincidence.

“Up until the time of my final thesis, I hadn’t even considered the subject of documentaries. I only ever wanted to make feature films, like all young people at university. But because I then wanted to do something about table tennis, to come to terms with my own sporting past, the feature film format was out of the question. You just can’t get actors* to the athletic level that I wanted to portray in the film.”

During the shooting of “The Chinese of Europe”, Milan was fascinated by the immediacy of the format, which comes from the intensive work and the personal closeness to the protagonists. By trying to realize this cinematically, Milan was also able to come to terms with his own past and history with sport:

“That’s the great luxury of my job, that you can capture your own reappraisal and make a movie out of it.” 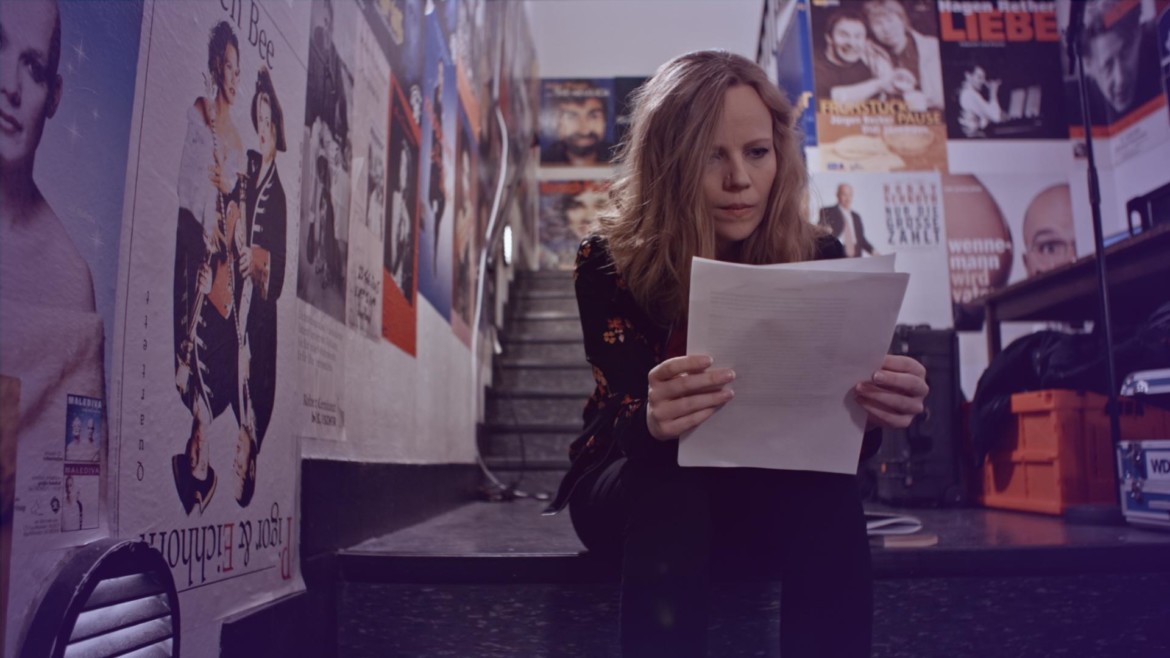 “We and Art” follows exactly this idea. Milan hoped to better understand his own relationship to art and his creative work, and the doubts associated with it. And so he once again sought the immediacy of the documentary film in order to get a little closer to himself. As to whether Milan also feels represented by the film, he immediately answers in the affirmative:

“Yes, I feel represented by the film. And it warms my heart when I see these artists, who are extremely well-known in their fields, and the same mental demons that have accompanied me over the last few years circling around them. And that is the case from beginning to end. Of course, I’m also the one who asked the questions. So when you watch the film, you already know quite a lot about me, even though I don’t appear as a character in the film. There’s definitely more of me in it than there is of the four who actually appear.”

The pandemic and the measures taken to combat it have lent a sense of urgency and poignancy to the film and its questions about the importance of art and culture. When the pandemic called for the first lockdown in March 2020, the first two acts of the documentary had already been shot. A third act was to follow, but then it was not realized for the time being.

“When Corona came along, we looked stupid for six months. And then I realized that this was exactly the right thing for the topic and that we had to finish this film, but with Corona. I couldn’t have released a film about art and culture without addressing that. Then we got our act together and came up with a third act with the four of them.”

Thus “We and Art” quite unintentionally documents what is probably the most significant historical event since 9/11 and becomes the cinematic expression of a collective experience. This gives the film a special mood, because it was itself surprised by what it simultaneously addresses.

“If someone had told me before Corona” says Sarah Bonetti in the film, “something is about to happen that will basically make your job impossible, I couldn’t think of anything that could have been.”

Milan succeeds in cinematically capturing the immediacy between him and the four protagonists* and thus creates a certain drama in the actual sense. Because the viewers know what will happen, that Corona will change everything and threaten existences, that we will temporarily lose the analog space of the cultural. The four artists don’t know this in the first two thirds of the film, but nevertheless talk about what has been so urgently on our minds since Corona: the significance of art and culture in our society. And while watching the film, it becomes clear how important the work of creative artists is.

“We and the Arts” is available to stream on Amazon, Vimeo, iTunes and GooglePlay, or on DVD. All info here.

Sustainable cultural practices – What politics and businesses are doing

The reality of man-made climate change is increasingly becoming part of society’s collective consciousness. As…

Every day, we let ourselves get carried away into emotional worlds by all the content…