Tobias York and Anne Spiegelhoff jointly form the management team at I LIKE VISUALS. The Berlin-based creative agency for moving image, branding and campaign building was founded in 2013 and has realized successful campaigns for Cornelsen Verlag, Berlin’s BSR or the district of Günzburg in recent years. A restructuring behind the scenes is also responsible for the success of the growing agency. Since 2019, I LIKE VISUALS has been in the process of implementing “New Work” concepts here. These not only promise more sustainability for production and personnel management, but also call for a change in dynamics and new roles for employees. At the Content Creator Festival 2021, Anne and Tobias talked to us about “New Work” and the internal process, which is not always easy and sometimes painful, but has already paid off. 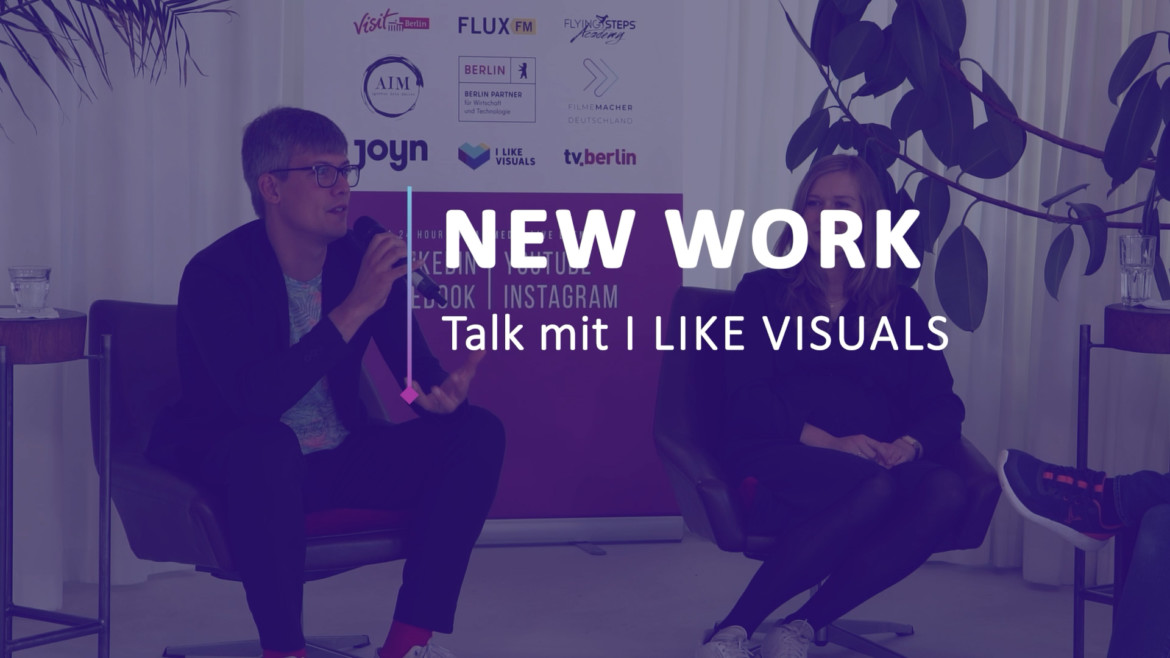 I LIKE VISUALS not only make visuals, they also like them, as the Berlin-based creative agency’s image film says with a wink. It presents itself as colorful, self-deprecating and a bit crazy. Their success proves them right. I LIKE VISUALS was founded in 2013 and has been growing steadily ever since. The projects became more elaborate and the team correspondingly larger. Most recently, the creative agency merged with the communications agency PLAIN in order to provide its clients with holistic support beyond moving image content.

Growth is good, but it’s also a challenge. As workload increases and teams and projects grow, the tasks, roles and dynamics in an agency change. Often this leads to more stress and unpaid overtime and pitches, so that employees are literally “burned out”.

For I LIKE VISUALS, however, such a path is out of the question. Since 2019, the startup has undergone a restructuring under external management and switched to “new work” concepts. At the Content Creator Festival 2021, we had the two managing directors Tobias York and Anne Spiegelhoff as guests, who gave us an insight into the elaborate, time-consuming and sometimes painful process.

Tobias York studied social work and business administration, but one after the other and not at the same time, which is somehow reassuring. After briefly dabbling in the event industry, he entered the startup business in 2013 as one of the founders of I LIKE VISUALS. In the meantime, Tobias has several such projects on his business card, of which I LIKE VISUALS, as the first attempt, is also the most successful so far. Shortly after the foundation Tobias also took over the management and built up the creative agency to the successful brand.

Anne Spiegelhoff has also been a managing director at I LIKE VISUALS since last year. When she joined the agency as project manager in 2017, she already had three educations in management, marketing and business administration as well as all kinds of practical experience in various companies under her belt. For the restructuring, she represents a central pivot.

Trust instead of power

At I LIKE VISUALS, there are no longer any classic job descriptions. Instead, they now work on a role-based basis. Each person has a role adapted to their skills and interests and is the contact person for everyone else in the team. Tobias and Anne are not managers in the traditional sense, but they also have clear roles. While Anne is the contact person in the areas of human resources and marketing, Tobi takes on this role for finances and acquisition.

Such a shift means handing over one’s own decision-making power to the team, since the team would have the better ideas anyway, as Anne tells us in the talk. For this to succeed, there needs to be trust, transparency and a working relationship at eye level, i.e. a non-hierarchical structure. For Anne and Tobi, this is a painful process. Transparency is easy to say, but much harder to put into practice. Here, it is also important to communicate one’s own state of mind and possible tensions that may have nothing to do with the actual work. Such a tension-based approach is an important part of the “New Work” approach of I LIKE VISUALS.

Another key point is the issue of sustainability, which the creative agency incorporates into all areas of work as a cross-cutting theme. Here, Anne in particular is very strict with herself and constantly tries to readjust, despite all the discomfort.

I LIKE VISUALS not only like visuals, they also like “new work” concepts and appreciate the creative freedom that can arise here. In the Talk, Anne and Tobias talk very openly about the internal process, as the topic is very close to their hearts. On September 29, they are also offering another workshop under the motto “work better together”. If you want to go into more detail and learn more about the Loop Approach and the sustainability approach, you can watch the entire talk on YouTube.

During the pandemic, life in urban centers like Berlin changed dramatically. From one day to…

German copyright law is complicated. Fundamentally, it protects intellectual property. In the case of music,…