Chancellor Angela Merkel invited 14 cultural and creative professionals to a digital dialog. Representatives from the fields of drama and music, art, the book trade, the film industry, museums, and the liberal professions had the opportunity to talk to the chancellor about their fears and demanded binding perspectives for the coming months and the time after the pandemic. 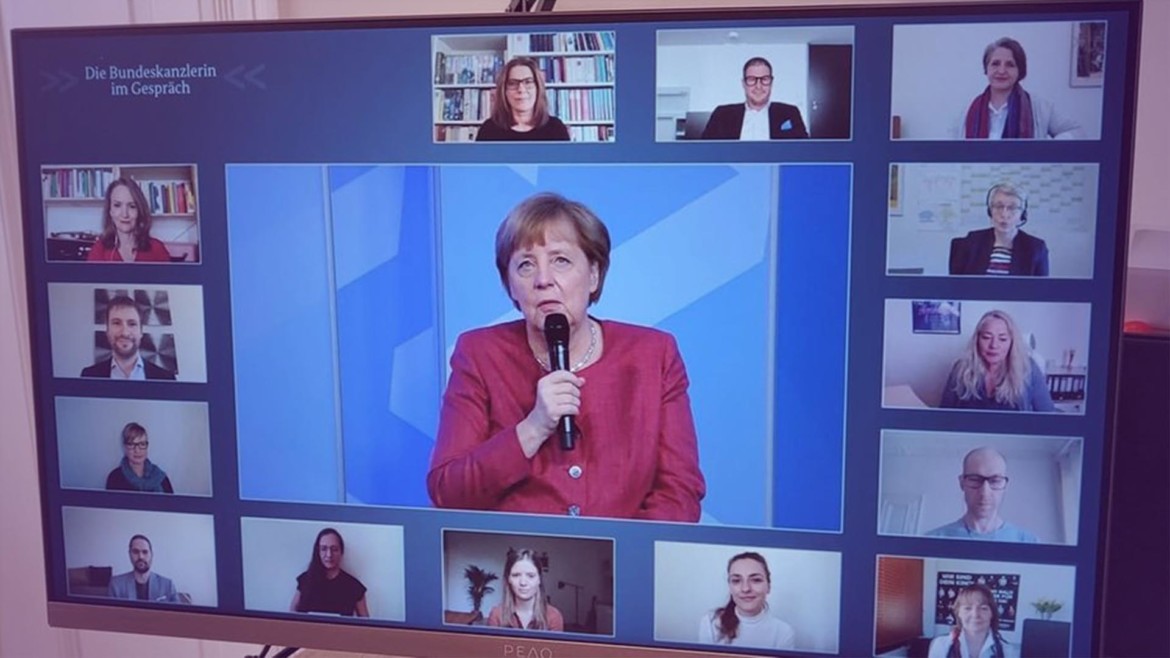 People working in the arts and creative industries have been severely affected for over a year by restrictions and occupational bans triggered by the Corona pandemic. Cultural institutions such as cinemas, concert halls, exhibitions, theaters and opera houses are closed.  Chancellor Angela Merkel invited herself virtually to 14 cultural and creative professionals and gave them the opportunity to talk about their experiences during the pandemic and to show immediate need for action.

Speeddating With The German Chancellor

In a total of 90 minutes, a dialog took place that a large part of the 1.8 million cultural and creative professionals had been longing for for a very long time. Solo self-employed people and entrepreneurs had their say. They showed our Chancellor where help was needed and not received, that payment of the November and December allowances in March was too late for most of them, and that equal treatment with employees subject to social security contributions (keyword: short-time allowance) was simply missing.

Angela Merkel’s time was more than short and her interlocutors had to keep it short. The speaking time was used by drummer Martin Hennecke to ask about the anchoring of culture in the Basic Law. Actors Katarina Schmidt and Farouk el Kalili succinctly expressed the existential hardships and the exodus from their industry.

Other cultural actors, such as cinema operator Marion Closmann, also denounced the lack of perspective. On-off operation is simply not possible for cinemas. They have to plan months in advance and get the films from distributors. Without films in theaters, they lose out on important funding. Add to that the fact that streaming services are currently sucking films off the market, and theaters’ post-pandemic exclusivity may no longer be there. Such is the fear of Ms. Closmann.

Bookseller Katrin Schmidt would like to see predictable reliability. Hygiene concepts are in place so that bookstores can stay open. Closing bookstores when books may continue to be sold in open supermarkets, kiosks and drugstores meets with little understanding in Ms. Schmidt’s industry. Angela Merkel said that it is generally difficult to distinguish what is system-relevant and what is not and also knows about the good hygiene concepts; also in the event industry.

Equality Instead of Special Treatment

The financial security of the solo self-employed has been discussed several times today. And again, the word “equality” was mentioned. Employees subject to social security contributions are financially protected by the short-time allowance and do not have to fall back on their reserves or insurance, as many self-employed people do. Musician Christina Lux openly addressed the fact that economic aid does not arrive where it is most urgently needed. The access to ALG I is still not possible for many of her colleagues and the application is more difficult.

Chancellor Angela Merkel listened attentively today and took a lot away with her. For example, making access to basic benefits easier and creating more predictability. It remains to be seen whether our federal government will do its homework and fulfill its mandate to the 1.8 million cultural and creative workers. The multifaceted arts and culture sector should not be dismissed as a leisure activity that is somehow kept alive with voluntary services here and there. Rather, it should be put on an equal footing with other economies, such as the automotive industry or the airlines. After all, next to our health, our cultural and creative industries are probably the most precious commodity and the third largest economy in Germany.

You can see the whole clip with Angela Merkel and the 14 representatives from the cultural and creative industries here:

Organizer: Gründerinnenzentrale e.V. On the third Friday of every month, you can meet other female…

The term content creation is intuitively associated with the digital space. It seems to be…