Christopher Bauder is a light artist and designer. With his team and musical support, he has created internationally successful installations such as Deep Web and Skalar, which were temporarily on display at Berlin’s Kraftwerk. The audiovisual performances always take place at the interface between art and technology. Since the beginning of June, the permanent exhibition Dark Matter has also opened in Berlin – somewhat delayed due to the pandemic. Here you can see 7 installations from the last 20 years, including a world premiere. We talked to Christopher about his work and the new permanent exhibition Dark Matter. 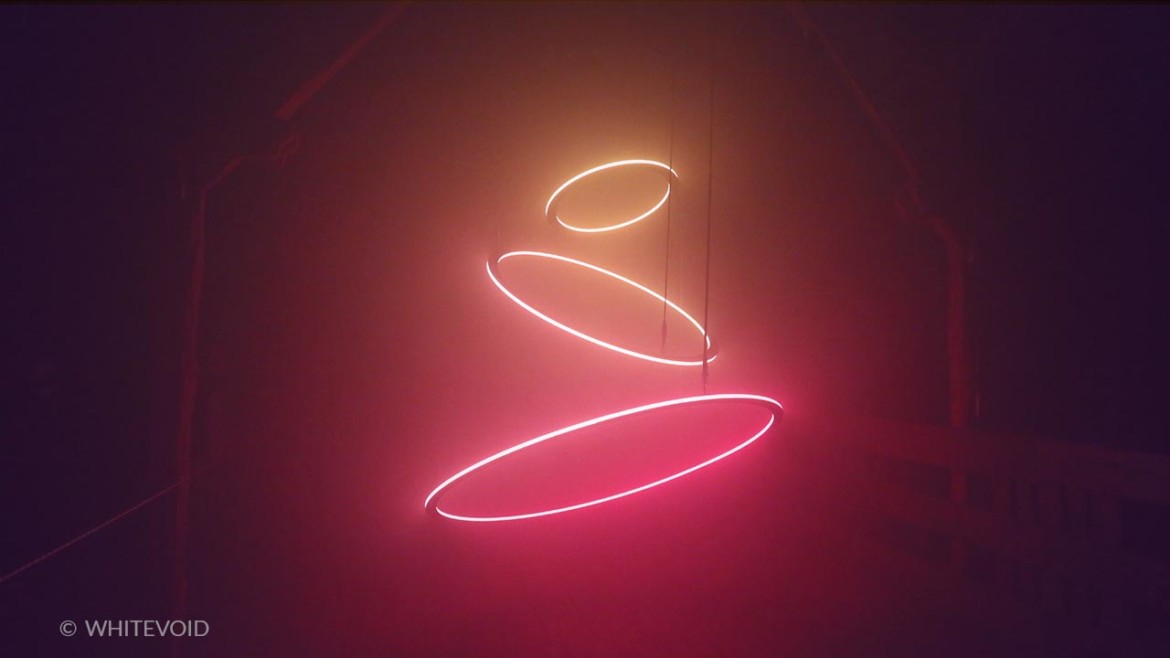 In Christopher Bauder’s artworks, light and sound are synchronized. A dark room, rumbling sounds, fantastic colors. Small parallel worlds in which the boundary between analog and digital reality blurs. Christopher and his team always work at the interface between art and technology. Light and sound meander together through space, creating virtual fires (“Bonfire”) or bringing matter to life (“Inverse”). Elaborate software runs behind the artworks, controlling the individual elements to create the technical illusions. Seven of his works can now be seen in the permanent exhibition Dark Matter in Berlin.

BETWEEN ART AND TECHNOLOGY 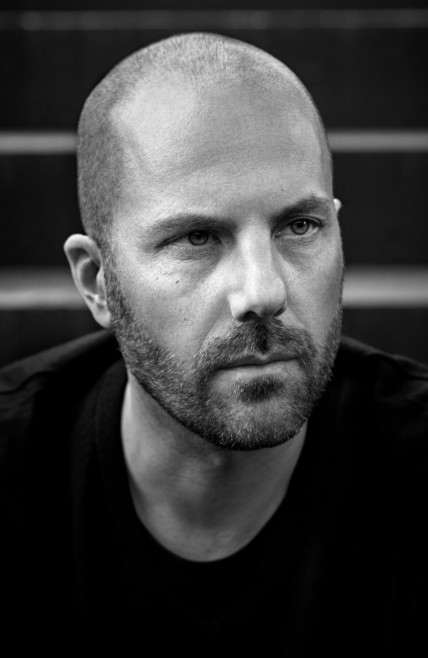 Christopher is not only an artist, he is also CEO and creative director of his companies WHITEvoid, a design and art studio, and the subsidiary Kinetic Lights, which develops and manufactures systems of Kinetic-Lightning. Both are located in Berlin-Lichtenberg and form the base camp for Christopher’s installations. Engineers, software developers, architects, interior designers, product designers and many more work here.

The team behind Christopher now counts 35 heads. Every project is a team effort. This concentration of competencies allows them to work (almost) autonomously. Everything comes from within. From the idea to the software and special components, such as winches and LED lamps. The dividing line between art and technology seems to dissolve in Christopher’s work.

“I come from an engineering family and have always been interested in technology,” Christopher tells us in the interview. “However, I had been interested in the artistic aspect from the very beginning, that is, what is possible in the combination of art and technology and software. That’s why I see myself as an artist first and foremost.”

The 47-year-old is internationally known because of his big shows like Lichtgrenze, Deep Web or Skalar. The latter was a guest at Berlin’s Kraftwerk in 2019 and has been touring the world ever since. For each show, Christopher collaborates with a musician. For Skalar with Kangding Ray, for Dark Matter with Robert Henke, who is also known as part of the duo Monolake. But touring with a show on such a scale is exhausting and always a bit unsatisfying for everyone involved.

“Organizing a show like this is an insane amount of work. We can never have the big halls we need for more than a month. Whenever word had just gotten around, it was already over. That makes it financially risky, because it’s not clear whether it can be refinanced. Plus, as an artist, you want to show your work to as many people as possible.” 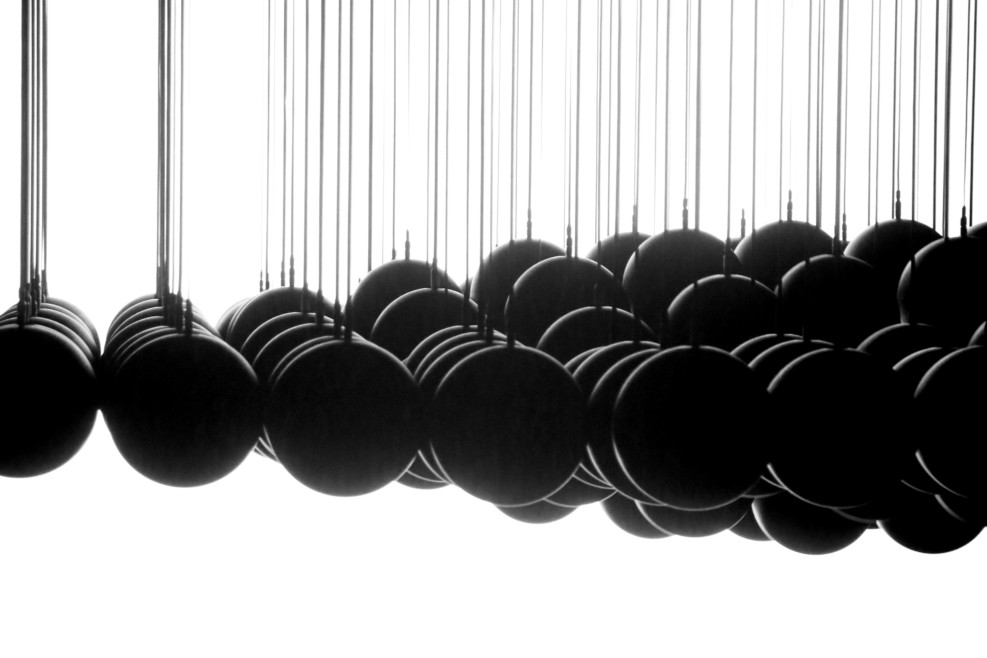 So Christopher’s team was additionally looking for a permanent solution. They finally found what they were looking for in the Lichtenberg district of Berlin, just across the street from the WHITEvoid studios, where “a multidimensional parallel world of light, space and sound” has now been created in seven rooms. Actually, the team had already targeted an opening in the summer of last year, but it was supposed to be perfect and so it took longer. In November it was supposed to be ready, but then Corona interfered again, so they had to postpone again. And so Dark Matter has not become less risky than touring with the big shows.

“The risk is again higher, because it is more expensive and by Corona now also incalculable. Currently we are sold out every day. But because of the restrictions, we don’t know if the number of visitors would still increase without them. Therefore, it is unclear whether Dark Matter would work in the long run. But we have 100 percent control and that is an important point. We decide what we do, when we do it and how we do it. We can always adjust and try out what works and what doesn’t. We don’t have that time in other locations. And then there are third parties who own the location and who talk us down hard.”

“Art is business. People always like to disguise that.” 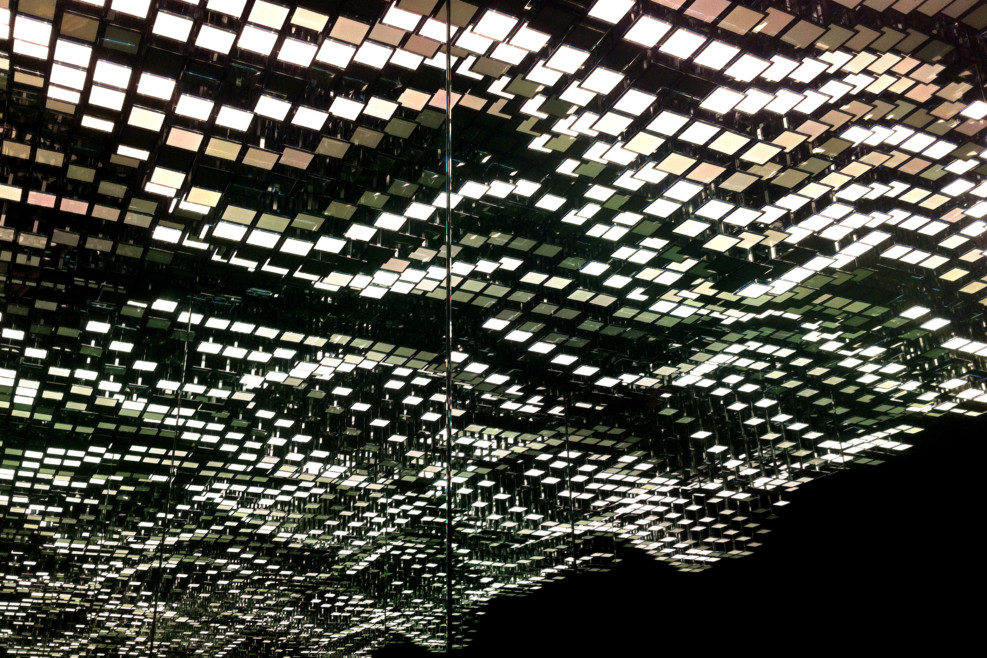 Christopher’s and WHITEvoid’s work is always about business. The technology and installations are borrowed or commissioned by sometimes large companies for their presentations or events. Dark Matter is no exception.

“Art is business. People always like to disguise that, but in the end someone is making money with it. And I have no problem at all if we then hang our artwork for the launch of the new S-Class. I don’t really care who pays for the art in the end, as long as I can make art. I have no reservations about that, and that’s why we don’t separate the two. Of course, a commission for a corporation finances the development of new works of art. And vice versa, new works of art in turn generate desire among some brand, which then hangs it in its entrance hall, or a club that finds the design cool. So it fuels each other quite well.”

The works on display are from the last 20 years, so Dark Matter is a kind of Bauder archive. Only “Inverse” premiered in the new space. Among the installations is also “Bonfire.” And when the artist himself sits in front of the LED bonfire, including crackles and sparks, he sometimes gets to thinking and reflecting.

“There are people sitting around this thing. You can do that for hours. It’s like a real fire, but it’s just lights that go on and off. And I could go out in the woods and have a real fire and enjoy nature. Instead, we sit there in a dark room and watch a copy of it. We’re constantly trying to artificially recreate the beauties of nature instead of just looking at it in the original. It’s such a contradiction. I don’t have an opinion about it at all, I think this artificiality is kind of cool and I think it’s exciting to play with this artificiality, which suggests to you that there’s still something natural there. I don’t have any explanation or solution to that, but I find it interesting that it’s so much fun to look into a digital fire.”

Recently we interviewed the Clubcommission Berlin. Now we have spoken with another political player in…

CULTURE IN THE COALITION AGREEMENT – WHAT THE Ampel HAs AGREED ON

The new coalition at the federal level consisting of the SPD, the Grüne and the…