In the debate about Cancel Culture, opinions differ widely. While some are concerned with ensuring safe spaces for marginalized groups, others complain about the loss of freedom of expression. Since the topic can also be significant for creative professionals, we examined it from an academic perspective at the Content Creator Festival 2021. Talk guests were Professor Dr. Tong-Jin Smith from the University of Media, Communication and Business and Dr. Christoph Neuberger from the Free University of Berlin. The very constructive talk dealt with the origins of the practice, how Cancel Culture became a political fighting term and what the problems of the digital debate culture are. 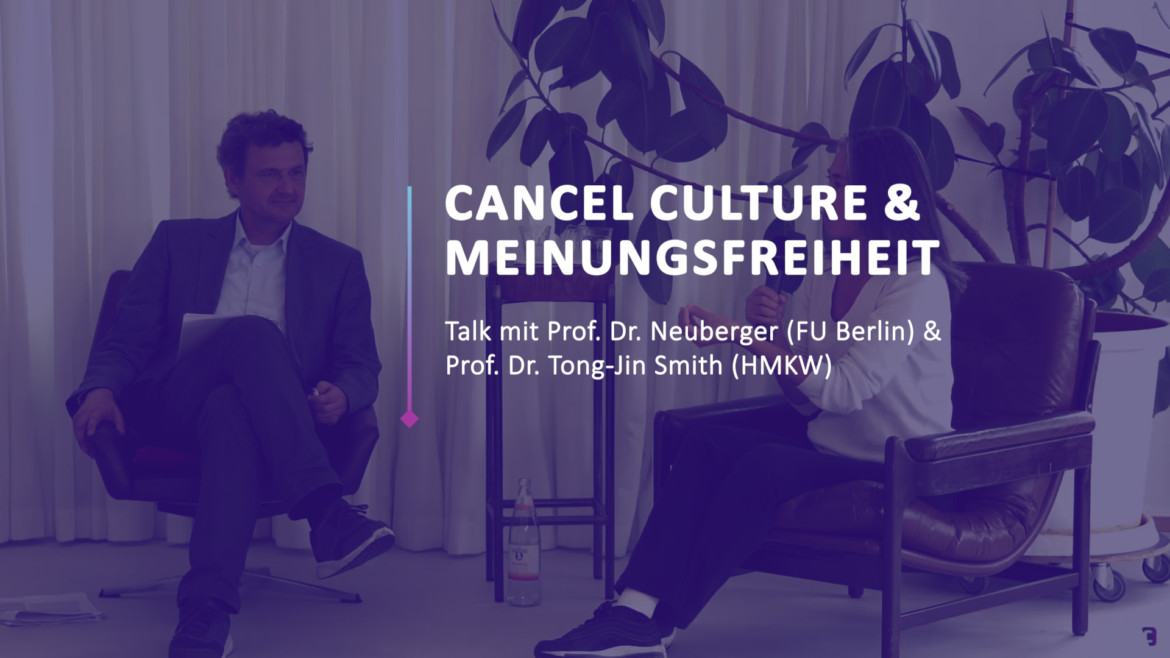 Our society is seen as divided as never before. Culture and identity battles are being fought everywhere. In this context, the phenomenon of “cancel culture” has also made a name for itself within the social debate. Behind the term is the practice of not allowing certain people to have their say in a media public sphere, i.e., disinviting them from talk shows or scaring them with threats. The debate is about ensuring safe spaces for marginalized groups on the one hand and restricting freedom of expression on the other. The practice can be observed in both politically left-wing and right-wing camps. Since financially successful content creation is hardly possible without media visibility, the issue also affects many creative professionals. Because a “cancellation” can mean the end of their career.

Cancel culture has become a political battle term that polarizes and divides. That’s why, for the Content Creator Festival 2021, we wanted to talk to and discuss with two experts who work and research on this topic. We were able to win Prof. Dr. Tong-Jin Smith from the Hochschule für Medien, Kommunikation und Wirtschaft (HMKW) and Prof. Dr. Christoph Neuberger from the Freie Universität Berlin for the talk.

Dr. Tong-Jin Smith is a professor of journalism at HMKW and a lecturer at the Institute for Journalism and Communication Studies at the Free University of Berlin. Her areas of focus include media and information literacy, digital information and news literacy, and agenda setting in the network society. In these areas, the phenomenon of or discussion about Cancel Culture is not far away. In addition, Smith is also a freelance journalist, so she can bring expertise from two different work contexts.

Dr. Christoph Neuberger is Professor of Digitization and Participation at the Institute of Journalism and Communication Studies at FU. Since 2019, he has headed the “Digitization and Participation” unit at the said institute. In his work on the digital transformation of media, the public sphere and journalism, Cancel Culture also plays an important role again and again, although he tries to avoid the term because of its combative gesture, as he tells us in the talk.

The two academics knew each other before the talk at the Content Creator Festival 2021 from their work at the Institute for Journalism and Communication Studies at the Free University of Berlin. It was a coincidence that exactly these two found themselves in the chairs next to our moderator Hanna. Thus, the conversation was very factual, constructive and without much controversy, which was very pleasant for the otherwise emotionally charged topic. Nevertheless, our guests would have liked to have a counter-opinion so as not to have to conduct the discussion in a one-sided manner, which is understandable.

However, we were able to learn a great deal about Cancel Culture through this conversation and enjoy its scholarly classification. Smith explains the origins of the Cancel Culture practice, which can be located less in the digital space than in the analog space and in connection with the U.S. Civil Rights Movement in the 1950s and 60s, which rebelled against the hegemonic structures.

Criticism is not cancellation

Christoph Neuberger emphasized the problem of escalation dynamics as a result of polarization, which is pursued by both sides. He points out that dispute is anchored in the essence of democracy and that in communication practices in the digital space, however, the rules that are so important for this are missing or frequently disregarded. In this context, Neuberger particularly emphasizes the role of criticism, which does not represent a restriction of freedom of expression, but should always be understood as an offer for communication, discussion and discourse.

Tong-Jin Smith also emphasizes this and agrees that criticism is not a cancellation. Rather, the problem arises where one’s own opinion is discussed as loudly as possible, while those who deviate from it are attacked and denigrated. Such attacks, however, prevent the space for development that is urgently needed for social change.

The talk also addressed the question of whether our society is really more divided than ever before, or whether people have never before dared to say so much. Digitality has made communication more likely and thus divergent opinions more visible.