The events industry has been hit extremely hard by the Corona crisis. Not only the industry itself and creative professionals are suffering, but also staff and large areas of the service sector. At the Content Creator Festival 2021, Stephan Hengst from the Berlin Music Commission and Melanie Seifart from KULTUR KREATIV BERLIN talked about their work during the crisis. They talked about possible financing and funding, advocacy during the crisis, and urban spaces for the cultural and creative industries. 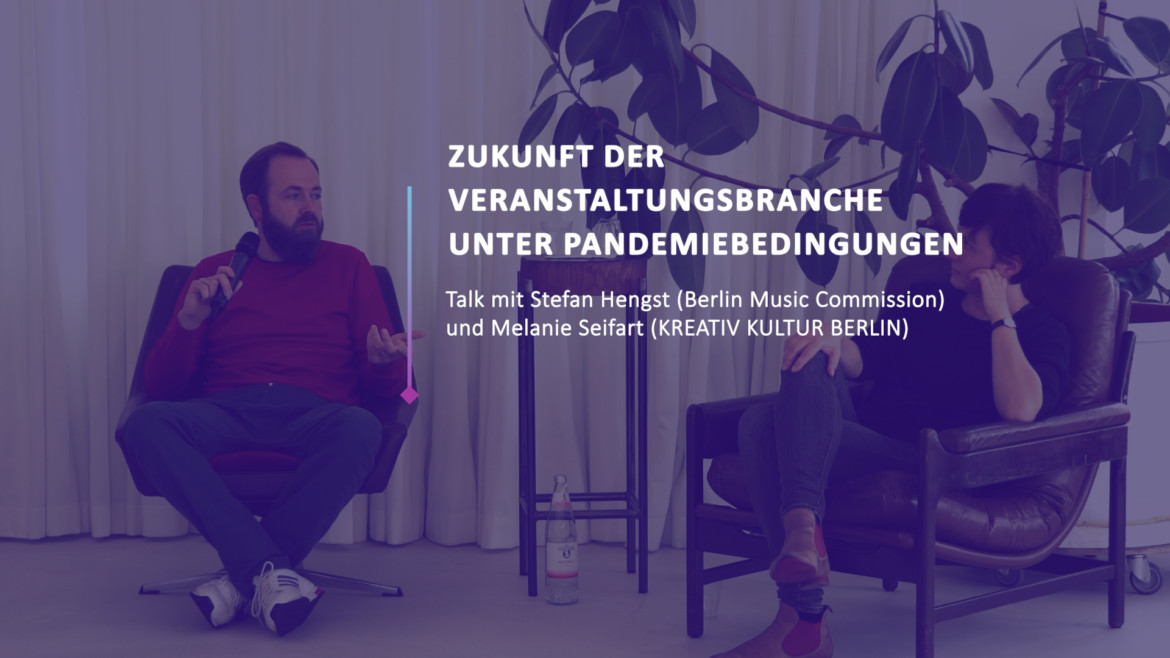 When the event industry came to a sudden standstill in March of last year, we were made aware of everything that is connected to it. Not only did event organizers, staff, creative professionals and areas of the service sector face financial hardship. The closed venues also raised and reified questions about the social role of culture and urban coexistence. Thus, the advocacy of these sectors became central actors in the crisis. For the Content Creator Festival 2021 we have invited two of these actors: Stephan Hengst from the Berlin Music Commission and Melanie Seifart from KREATIV KULTUR BERLIN.

Getting involved instead of watching

Stephan Hengst is an independent project manager and event manager. At the Berlin Music Commission (BMC), he is responsible for the Most Wanted: Music conference, where the professional music and creative industries engage in exchange and launch new ideas and perspectives and business models.  During the crisis, Stephan was one of the people who set up the Berlin event industry specialist group at the BMC. The background of the expert group was quite simply to do something for the scene itself and to enter into an exchange with the Berlin Senate Administration. In this way, the group brings its expert knowledge into the debate and intervenes in political decision-making processes.

Melanie Seifart is a cultural manager and has been working at KULTUR KREATIV BERLIN since 2016, where she is responsible for creative industries consulting. The advisory center is the first point of contact for cultural and creative professionals in the capital who need information or support in the areas of project financing, cultural funding, professionalization, self-employment or for their start-up project. It is a free service offered by Kulturprojekte Berlin. Before Melanie started at KULTUR KREATIV BERLIN, she managed the regional office of the Competence Center Cultural and Creative Industries for three years. One of her main focuses is intercultural education work.

During the crisis, advisory services such as those offered by KULTUR KREATIV BERLIN played an important role in supporting creative professionals. This is because, in addition to providing advice, the center’s core competencies include networking and arranging contacts. Especially the billion-dollar and complicated funding program Neustart Kultur would have unsettled many of those concerned and kept them from applying. Here, it was also a matter of reducing fears and bringing light into the darkness of the applications.

Despite all the help, and perhaps because of its insufficient volume, many people have left the industry. Not only creative people, but also the staff in the clubs and event venues. Where the 2G rule now makes it possible to operate again, there is a lack of experienced staff in many places that cannot be reactivated so easily. Especially because there is still a great deal of uncertainty in the event industry, as Stephan tells us in the talk. He is clearly in favor of federally funded PCR tests, even for vaccinated and recovered people, as this approach could restore some security to the beleaguered industry.

The talk also addresses the problem of spaces for culture and how these can be protected. Both see politics as having a duty here to keep Berlin attractive both as a place to live and as a cultural and business location. What is needed in the short term, however, are visitors to the events that are taking place again. Here, people need to gain confidence in the safety and hygiene concepts.

The complete talk, as well as much other content, is available on the Comacon YouTube channel.
BMC’s Most Wanted: Music conference will take place Oct. 26-28. Tickets are available here.

After lockdowns, liberalizations, renewed rule tightening and numerous event cancellations,in the second half of the…

Recently, we tried to shed some light on German copyright law; in areas of music…

What the festival summer 2021 has in store for us

A curfew after 9 p.m. or even the restriction of people meeting in the open…