For the 47th time, representatives of media companies, journalists and the media:net berlinbrandenburg network met on Monday evening at Spreespeicher Berlin for the Media Summit. Together, they posed the question of what kind of society we want to live in in the future and what role the media will play in it. Under the motto “The Day After” – although the Corona Crisis is not over yet – on the stage and also later on the terrace, people talked and discussed about the restoration or the high social goods credibility, sustainability and responsibility that need to be rethought. We were there and interviewed the panelists after their presentations. 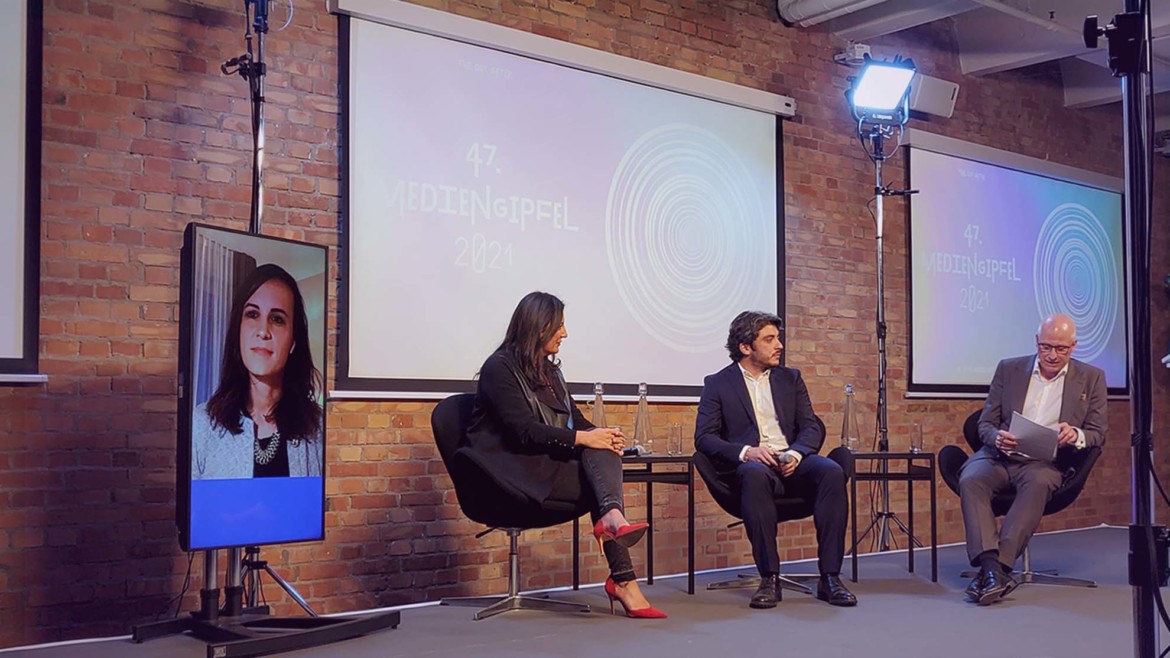 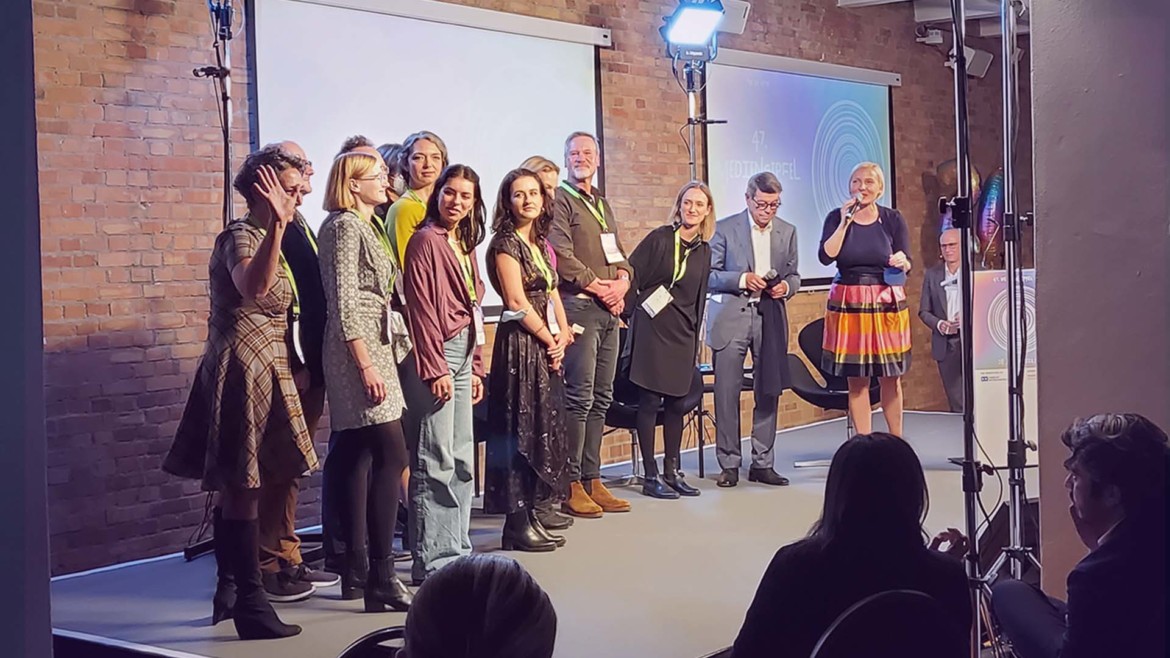 The media industry has learned its lessons from the Corona crisis, but has also recognized and seized opportunities. At the 47th media summit of media:net berlinbrandenburg in Berlin, the upheaval in society as well as in the industry itself is certainly noticeable among the participants. The media industry is much more aware of its responsibility than it was before the Corona crisis. This was made clear on Monday evening by the motto “The Day After”.

But it was not just a look at the past year under the prevailing pandemic. For media:net berlinbrandenburg it was the 20th anniversary, which was duly celebrated in the evening. In addition to board chairwoman and managing director Jeannine Koch, Helge Jürgens, managing director of new media funding at Medienboard Berlin Brandenburg, welcomed the 200 or so invited guests on site. The chairman of the supervisory board Bernd Schiphorst was also present. Via LIVE broadcast on ALEX Berlin, viewers were also able to watch the event from home.

BERLIN AS A MEDIA LOCATION

Helge Jürgens aptly summarized the development since the founding of media:net berlinbrandenburg: “Over the past 20 years, our media location has become one of the most important business sectors in the capital region.” Anyone familiar with media:net berlinbrandenburg knows that the network association of the media, creative and digital industries is known for bringing the media industry together and continuously strengthening it. This is always gratefully received by the member companies. This was also the case at this year’s media summit in Berlin. The guests present were given an exciting insight into the upheaval in the media industry and the problems it is facing. Always in the focus of the conversation: Education, knowledge transfer and transparency, which are the responsibility of media companies towards society.

In keeping with the upheaval, the leadership of media:net berlinbrandenburg changed this year. Jeannine Koch has been CEO of the network association since January 2021 and slipped into her new role with passion and commitment. As director of republica GmbH, Jeannine was responsible for re:publica Berlin, as well as numerous analog and digital conferences in Germany and abroad. At media:net berlinbrandenburg, she focuses on expanding the network and creating new digital and analog platforms, formats and interdisciplinary networking opportunities. If you want to learn more about Jeannine Koch, be sure to listen to the Comacon podcast with her. Under her leadership, the network will continue to grow in the coming years, as will the diversity of the media.

The panelists provided interesting and shrewd insights into the current state of the media industry. With the help of his discussion guide “Attempting to take stock of what needs to be done to guarantee journalistic credibility and diversity, social participation and social unity,” Volker Wieprecht led the evening. With his many years of experience as a journalist, author and entrepreneur, the moderator asked the panelists exactly the right questions. And the selection of panelists could hardly have been more diverse.

STORYTELLING IS A WEALTH

Our media still do not portray enough of the multi-layered nature of our society. Despite progress, we still need more narratives of colorful lives that show us the different parts of our society. “As a journalist, what I’ve learned above all is that I have to follow an information goal. And that there was always a lot of anxiety around the subject of emotions. But I firmly believe that a lot of what we do today is also so successful because we follow an emotional goal and an information goal,” Düzen Tekkal emphasized. Khesrau Behroz also sees the current challenges facing the media as an opportunity to spur change in the industry. “Journalism is so good right now because it is so well challenged,” he told us after the event. Precisely because journalism has a lot to contend with in terms of disinformation and fake news, it feels overrepresented and is increasingly allowing diverse and varied voices to have their say.

Generational change is also having an impact on public debate. Younger generations are more likely to take the floor and go outside with their stories than older generations would have done in the past, observes Düzen Tekkal. But in order to tell the stories authentically, another grievance comes to the fore. One problem that is repeatedly addressed – also by the panelists – is the diversity in Germany’s media institutions.  In order to be able to tell our society and multifaceted stories of individual groups of people in the media, diversity in the media institutions is indispensable. According to the experiences of Düzen Tekkal and Khesrau Behroz, the media institutions have not yet reached their goal, but are already well on the way.

Journalism has never been as good as it is today. But it has also never had to fight so many windmills. Khesrau Behroz says that if we want to understand the world we live in, we need to look 20 years into the past. It’s important to understand what the path looked like and not just focus on the outcome. In his podcast “Cui Bono- WTF happened to Ken Jebsen?” he traces the evolution from successful radio host to conspiracy theorist. Journalistically, it’s a challenge. But that’s what good journalism is all about. Questioning and exposing disinformation.

Combating disinformation is also one of the tasks of Medienanstalt Berlin-Brandenburg. The director of mabb, Eva Flecken, was most recently Vice President for Regulation and Protection of Minors and Policy for the German-speaking region at Sky. What Eva Flecken observes is, above all, the particular volume in social media. The complexity of opinions leads to one or the other believing that they have to be particularly “loud” in order to be heard. In most cases, these are brutal accusations that would never be voiced in the analog space. Regulation is needed here. Regulation and promotion should go hand in hand and ensure understanding in the media to support or strengthen credibility in the media even after the corona crisis, she says. 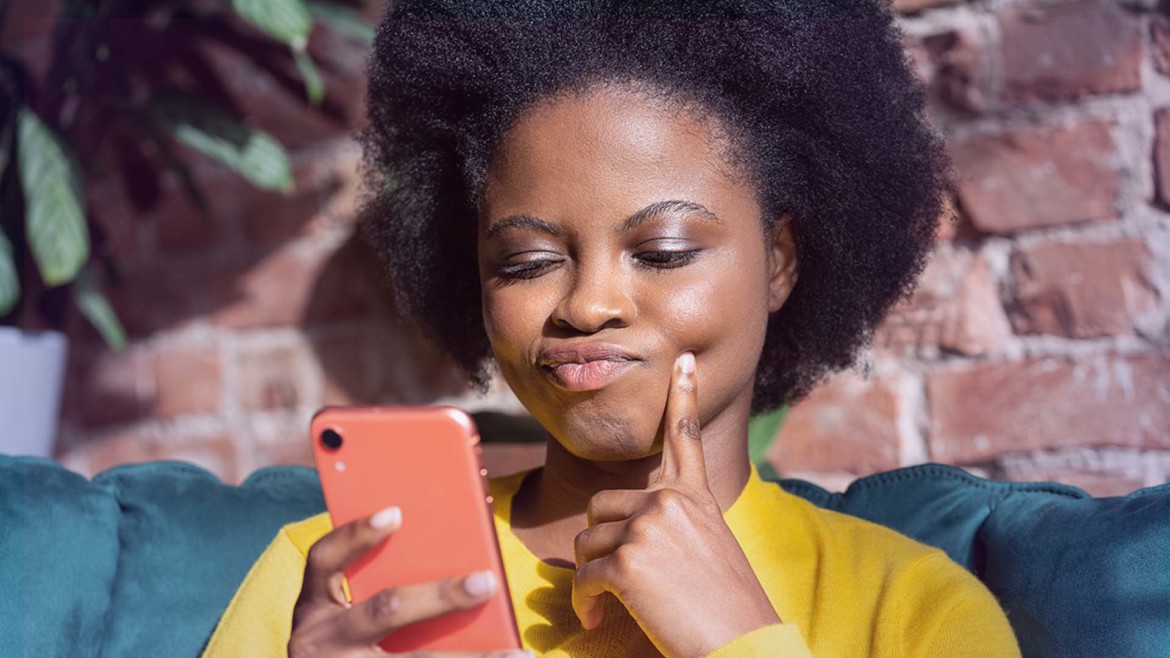 The Corona crisis brought to light just how fragile and susceptible to disruption a democratic system like Germany’s can be. The Day After must restore and strengthen society’s trust in journalism. The media industry has the valuable task of informing our society and depicting its complexity. Credible. Sustainable. Transparent. It must earn society’s trust. And that means quite a bit of work and change for the media, which is made more difficult by the spread of fake news and disinformation.

The media industry is working to earn society’s trust. Through good journalism and a – still too little – diverse image of our society. But also every single person who uses social media can contribute to stopping fake news and support the work of serious journalism. Question, do your own research, disagree. But above all, don’t believe everything that is posted on the WWW.

You can watch the whole talk here.

Since the Corona pandemic, it has become clear to us that the old working world…