As Managing Director of the creative and communications agency Flimmer Group, Özlem Roden has been responsible for one or two viral marketing stunts in recent years. However, her path did not lead her there in a straight line, but rather in a zigzag. German-Turkish cultural work, a law degree and scripted reality are markers on this path, which seems anything but boring. In the podcast, she spoke with Timm about her diverse experiences, B2B communication and the hurdles of a member of the creative industry. 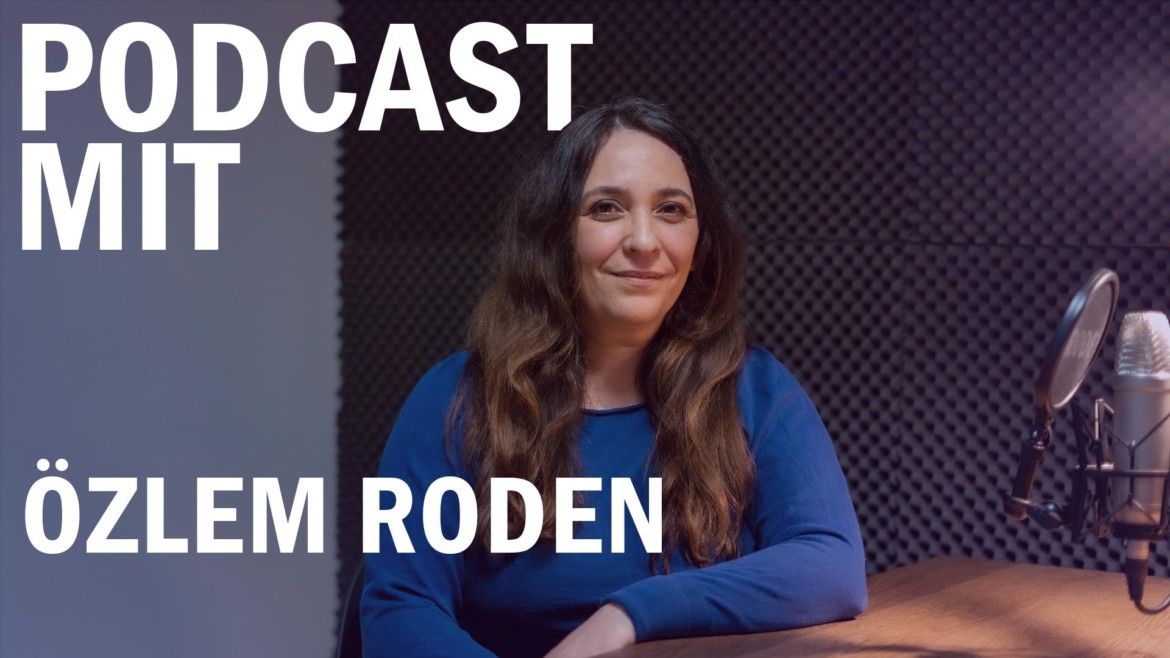 Özlem Roden has taken a few turns in life. Today, she works at the Flimmer Group as Managing Director and realizes sometimes crazy marketing stunts for the creative industry. Among them an oversized head of President Snow carved in stone, literally blown up in a quarry for a Mockingjay campaign. But before that happened, Özlem went through several other stages in the television, media and creative industries.

The 51-year-old grew up in Mönchengladbach and came into contact with event planning at an early age, when she organized theater and music evenings as well as events with invited guests from politics for her parents’ German-Turkish cultural association while still at school. Özlem’s decision to study law in Cologne after high school seems rather counterintuitive. But what drove Özlem was her desire for social engagement and social change. She wanted to use her immigration background to make a difference where she felt she could.

But after many semesters of regular studies and the upcoming state exams during her pregnancy, Özlem was overcome with doubts about whether she was still on the right path for her, and decided without further ado: she wasn’t! Even before her exams, she dropped out of her studies and returned to her creative work, mainly writing.

She couldn’t have chosen a better time. With the arrival of music television in the 1990s, there was a real gold digger mood and many new production companies were fighting with new formats for the best broadcasting slots and their piece of the German TV pie. At the time, her friends knew better than she did that Özlem was a good writer. She believed them and sent a work sample in the form of a dialog book to a production company. Shortly after, she was a writer for Unter Uns, the soap opera that competes with the German hit-TV show GZSZ.

Being able to do it is one thing. Getting it confirmed is another. And if Özlem has had a lesson drilled into her, it’s that in Germany you have to have everything confirmed with an official stamp. “What was once a woman’s jewelry is now her education,” her mother advised. She also wanted more than telenovela and scripted reality; she wanted to be in film. And so she attended the International Film School in Cologne, where she learned the “craft” of screenwriting officially and, in the end, confirmed with a stamp.

With B2B into happiness

Her thesis was bought by WDR in 2001 and was to be placed prominently on ARD. But the love story of a Turkish girl in Germany and a religiously radicalizing ex-boyfriend collided with the 9/11 reality that fall. Suddenly, the story didn’t work anymore, as it tried to explain a previously little-known reality that the whole world was talking about in just a few hours. WDR became cautious. And so what could have been the start of a career ended up in the WDR archives, where it will never come out again.

While Özlem tried to save her film project, she was quite successful with her work in television. But as a single mother, she lacked a secure and regular income, so she once again took a different path. This time, Özlem ended up in film production. Here, she worked mainly in the B2B sector and realized image or corporate films. This was followed by a move to Berlin, where Özlem worked as Senior Project Head for insglück and was responsible for Google’s YouTube Festival, among other things.

From there, it was not far to the communications agency Flimmer, where she and her small team realize the sometimes crazy marketing stunts of the Webedia subsidiary. Özlem now feels that she has finally arrived here. In the podcast, you can find out what it’s like to work with B2B clients, how the Flimmer stunts come about, and how the German authorities can be persuaded to do them.